Durk Valkema / In the heat of the moment (no burns necessary) 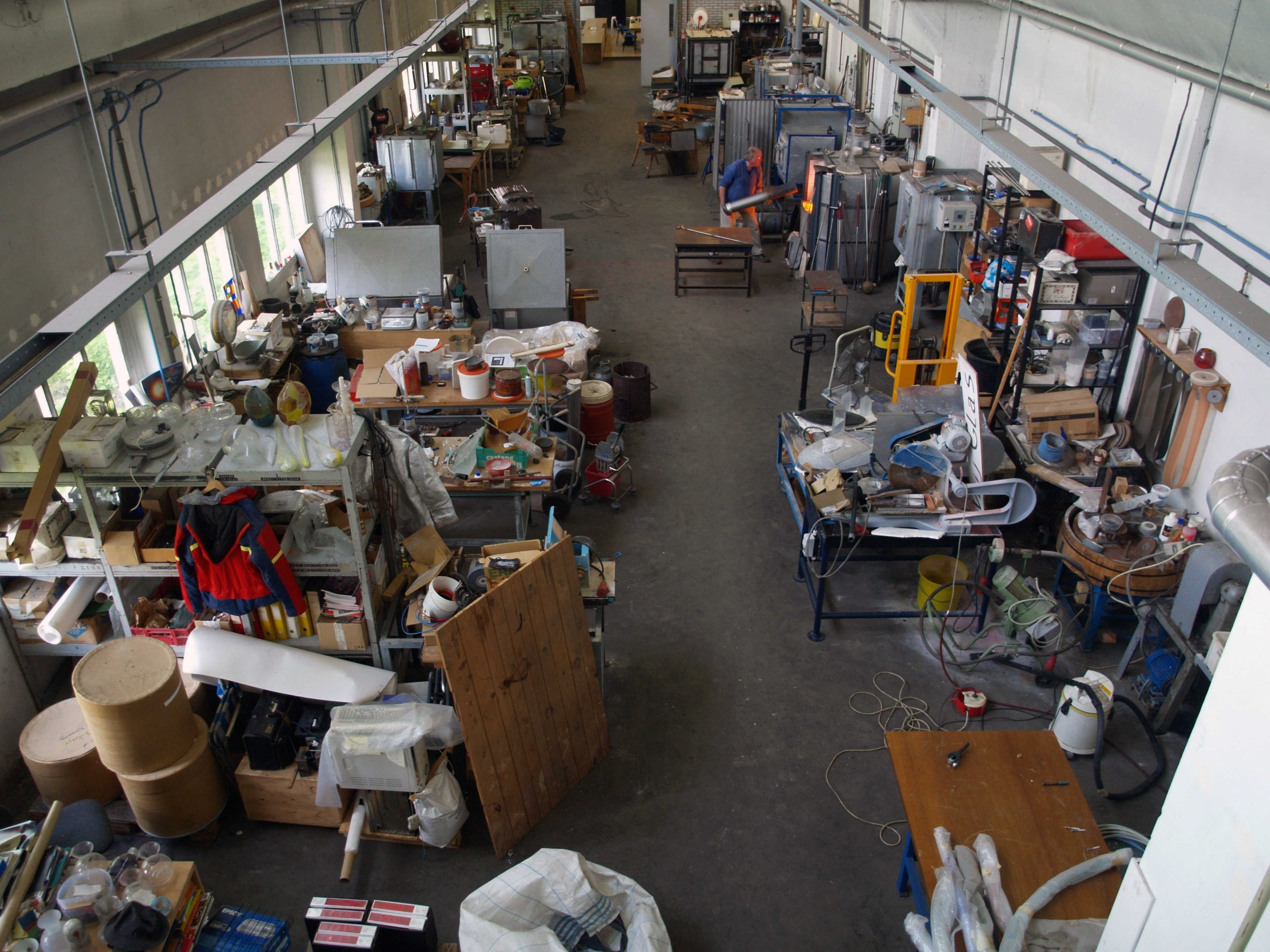 A booming creative hub known as the HEMbrugterrein lies only a ferry ride away from Amsterdam’s Westpoort area, in the historically industrial city Zaandam. What used to be an ammunition factory now harbours an array of studios, start-ups and workshops. Glass artist Durk Valkema and his Vrij Glas Foundation settled in as one of the first tenants, more than 15 years ago, with the aim to offer anyone interested in glass the infrastructure to experiment. “Vrij Glas as in free jazz,” he explains. Countless ovens are lined up in the hangar, each one built and installed by Durk himself, offering all kinds of possibilities for jamming. “Anyone can learn,” he says encouragingly. “No burns necessary.”

Since his graduation in 1975 — from the Glass department of the Gerrit Rietveld Academie, which was set up by his father Sybren Valkema — Durk has developed a signature style of monumental, blobby glass sculptures that appear to suck in and spit out any light that hits them, depending on your angle. His motivating attitude has taught many students, artists, and even scientists the basics of working with glass hands-on: “I believe it’s of real and lasting importance when people can meet face to face, when they can have a visceral rather than a virtual experience of a particular place and time, and have all those minor but meaningful personal interactions. To engage all of your senses, to smell things, and hear things…”

A few weeks ago, his worldwide significance in the field of glass was honoured by the Glass Art Society. “My 15 minutes of fame,” he says modestly, but the praise speaks volumes: “Valkema has gained a strong reputation as a furnace builder pioneering energy efficient solutions. (…) His broad technical and practical knowledge, in combination with aesthetic insight, has made Valkema an important resource in the development of competitive and technically innovative design for art glass and product design.”

Seems like I caught you in the heat of the moment. Is glass a hot topic?

“It’s hard to imagine now, but back in the day, if you wanted to do something with glass, you made a design and brought your drawings to a glass blower in a glass factory. Working with glass was still an industrial thing. It wasn’t until 1962, when the American artist and teacher Harvey Littleton introduced a small oven for working with hot glass on individual scale that the so-called Studio Glass movement came into existence.”

“To be able to work with the material glass by oneself was nothing short of revolutionary! So when the glass workshop at the Gerrit Rietveld Academie was installed by my father three years later, it really attracted some attention. Students from all over the world came to study in Amsterdam. It was a hot topic. And still today, glass artistry is prone to discussion. The question is put nicely in German: Kunst oder Handwerk? It can really tick people off when their work isn’t considered art with a capital A… Fortunately my work sold well from the start; and I’ve always been building furnaces for glass artists all over the place.”

What exactly sparked your knack for glass?

“I blew my first bubble at eight. My father was a glass designer at the glass factory in Leerdam and took me along one day. He parked me in the corner with a piece of paper and some colouring pencils. The supervisor thought I was a good boy, so he gave me a blowing pipe instead. I remember my disappointment when my first big bubble was chucked into the bin…”

“My father had worked in Leerdam during the war already, as a teacher for a class of twenty or so, to prevent those boys from being put to work in Germany. It’s amazing to realise how people, in the midst of all that misery, were already preparing for a brighter future after the war. They were determined to build up a better world.”

“During those years of reconstruction there were a lot of developments in education. Various art vocations were merged into what we now know as the Gerrit Rietveld Academie. Willem Sandberg was involved and Mart Stam was the director at the time. He invited my father to set up a course. A few years later his Werkgroep Glas came into being. It was the earliest glass workshop in Europe in a university environment and still today, the Gerrit Rietveld Academie is the only art school in the Netherlands with a workshop for glass.”

“But I didn’t go to the Werkgroep Glas immediately. First of all, it wasn’t a real department back then, kind of like how it is now. You had to do a year of painting or sculpture or ceramics or jewellery, or something like that, first. You can really lose yourself in the technicalities of glass, so it was handy to develop a sense of form beforehand. Of course, I was also a bit reluctant to join a workshop run by my father, I wanted to try other things first. And, at the time, I was more interested in the possibilities of ceramics.”

“Soon, though, it became clear that the pottery wheel was not my cup of tea. I was always covered in clay from the minute I started, while master throwers who came to visit made the most beautiful things with only the slightest traces of clay on their finger tops! The process was too slow for me too; the throwing, the drying, the glazing, the firing… I found myself constantly glancing at the glass workshop, which was still in that little building, the Rietveld pavilion, back then. That’s when I decided to continue my work with glass instead.”

Did the revolutionary years at the Gerrit Rietveld Academie kindle a lasting fire?

“After graduation, I went to Prague to do what you would now call a post-grad education at the Czech equivalent of the Gerrit Rietveld Academie. Where the Rietveld emphasised making one’s own work, the school in Prague was more academic; it was all about human proportions, so we used rolls and rolls of paper to draw models in true size, while at the Rietveld we got our paper from the concierge and just scribbled this or that.”

“I have always had a strong interest in technique, so I was happy to study with Stanislav Libenský and Jaroslava Brychtová at the UMPRUM Academy in Prague after the more conceptual studies at the Gerrit Rietveld Academie. But even during my years at Werkgroep Glas, I had both a technical side and an artistic side. I was always taking care of the furnaces in the workshop. Fact is, being able to think like an artist makes you a very rare kind of engineer.”

“The good thing about the Gerrit Rietveld Academie, was that our graduation was in a gallery, which immediately put you in touch with the right people for your work. There was a whole network available. And in that time studio glass was something new, there was a lot of interest for the material. Our work was collected and exhibited, we organised conferences, demonstrations, there were galleries specialised in studio glass… We were very open to everything.”

“But things did cool down after the economic crisis. It’s harder now. You can buy a mechanically produced glass for 1,50 whereas I’d have to charge 150 for something handmade. It seems like young people would rather spend their money on a trip to Bali. Oh well, the world changes… In a way, it seems like we’re back to how it was in the beginning: people bring their designs to a glass blower, instead of working with the material itself. But it does make a difference! When you know your material, you’re able to stretch the limits of what is possible.”

“That’s one thing I appreciate from my years at the Gerrit Rietveld Academie: we would come to concepts and form through the craft itself — by experimenting. There, my father taught me to be positive about finding your own way, about trying things out, and offering others the right tools to do so as well. It turns out that his love for teaching was passed on to me, too.”

And is there still a Valkema furnace burning at the Gerrit Rietveld Academie?

Durk chuckles. “No, the current oven is not one of mine anymore. But you’ll still find a glory hole there, which was built by me. That’s a small oven to warm up the glass during the blowing process, to prevent it from cooling down too much and keeping the glass hot enough to work with.”