Mio Fujimaki / The values of knowing and not knowing 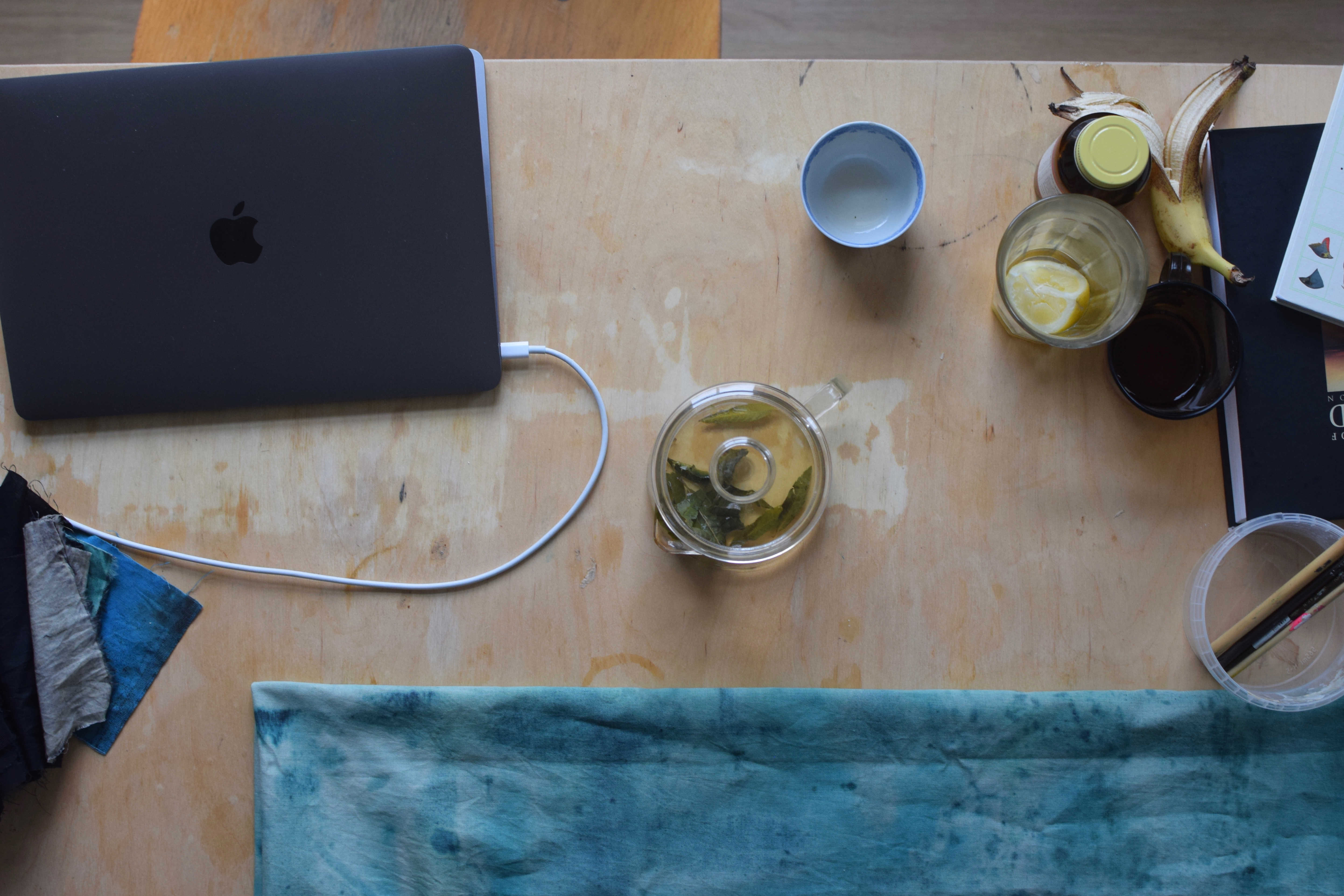 Having just returned from her morning Dutch class, Mio Fujimaki invites me into her studio home. There’s a Dutch saying, ‘driehoog achter’, meaning ‘at the rear and three stories high’, which is typically used to describe small apartments in the older neighbourhoods of Amsterdam. Although she has room for only a bed, a bookshelf, and a table, Mio’s small studio feels open and spacious. Grey light spills in through the windows and over her shoulders onto the pieces of cloth she is working on: stacks of identical black fabrics that she bleached to make different colour shades appear. In Mio’s work obscurities are exposed, like the stress patterns in glass or the reflection waves between the sun and the moon. Her work captures images you wouldn’t have known were there if she hadn’t revealed them. It’s very quiet at the rear of the building and three stories high. While she makes tea, even the boiling water sounds calm and steady.

Did you know Amsterdam before studying here?

“Oh no, my choice for the Gerrit Rietveld Academie was kind of accidental. I had never been abroad, had always lived in one specific part of Tokyo, until I went to a ceramic summer course on a little Swedish island called Öland. I really liked it! At the time, I was working as an assistant for the Tama Art University where I had studied Textile Design. It was nice, but I kept thinking: OK, I would quite like to get out again. I started to learn English and prepared to apply for a Swedish art school, but that year the laws changed for foreign students, and the tuition fee just got too high for me.

There I was, hanging in mid-air with all my motivation to move abroad! My mind had already moved. So I kept searching and that’s how I came across the Gerrit Rietveld Academie. I was checking the Jewellery department because of its materiality. In Japanese art schools, you learn specific skills for a specific craft. If you’re in the Textile department, you study textile and nothing else. You choose what specific skill you want to learn — weaving, or dyeing, or print, or fashion — and you stick to that skill. It’s really strict; if you choose weaving, you cannot graduate with dyeing. So when I was studying there, I became fascinated with the idea of using other materials. That’s why the Jewellery department seemed like the right place for me.”

Mio briefly pauzes. “Of course, then, at the Rietveld…” She chuckles. “There was sooooo much openness! Even though I was in the Jewellery department, I could visit any other department if I wanted to, use all other facilities. And the teachers just let us work unless we needed to talk or felt lost. My mind got confused! Especially because I wasn’t really making jewellery pieces. Instead, I was interested in the value system of jewellery; the material value, physical value, emotional value, social value… Jewellery is mostly kind of tiny and personal, but if it’s made of diamond or gold, it suddenly has this absolute market value too. I liked looking into this system, weighing visible and invisible value, and thinking about how these values could be interchanged.”

Could you ascribe a value to those years at the Gerrit Rietveld Academie? What were they worth to you?

“It was a struggle, but not in a bad way. I think being confused isn’t always a bad thing. Actually, there was this important moment during those years when I realised: I can just say ‘I don’t know’ if I don’t know! In Japan, to say ‘I don’t know’ meant you weren’t studying hard enough, weren’t listening… So I was very careful when to say it, but that changed when I was at the Gerrit Rietveld Academie. People were willing to share things, people asked questions and by asking a question, it became everybody’s question, and we could talk about it together.

I think that really influenced my personality. Where at first I was more solid I became flexible and found it easier to accept other ways of seeing things. Of course, maybe this influence was a necessity for me as a foreign student. You know, I came from a mono-culture in Japan. Everyone around me was Japanese and because I was born there, being Japanese was just… normal. I’d never regarded myself as ‘Japanese’.” She smiles, tentatively. “Being at the Gerrit Rietveld Academie gave me new perspectives altogether. I had to make a new life in a foreign country and the Rietveld was my home, the place that I came back to every day, where I made friends and where I could work.”

You continued your studies with a master at the Sandberg Instituut. Was that a necessity as well?

“I hadn’t planned it, but there was a teacher, Erik Mattijssen, who gave drawing workshops at the Jewellery department and was teaching at the Material Utopias master at the Sandberg too. I liked his classes, so that made me think about going there. Material Utopias was a temporary master, but it turned into Materialisation in Art and Design, which is what I studied.

It was a different experience because I was more easy on myself then. I think, perhaps, the reason for that was because my graduation from the Gerrit Rietveld Academie actually felt bad. Yes, it felt bad! I hadn’t made real jewellery pieces, so I just thought people hated my work. It was a shocking moment, but its impact turned out for the better. It made me realise that my ambitions were facing outward, that I was giving value to my work based on the evaluation of other people.

At that moment I thought: maybe, if I follow my own interests, it will catch the interest of other people too. That was an uplifting feeling. It was the same feeling I had when I first moved to Amsterdam from Japan and started studying at the Rietveld. Practically speaking it’s easier to live in your own country because you know your way around.” She smiles. “But I feel lighter here, as if there’s no gravity.”

And now you have two bachelor degrees and a master of art. Do you know what’s next?

Mio contemplates the question. She looks at my empty cup and pours more tea. “The other day I was having a drink with my colleague in front of the restaurant where I work three days a week. Like me, she studied at the Gerrit Rietveld Academie and went to the Sandberg Instituut. We were drinking tea, outside, late in the evening, and then a drunk guy came by and started to talk to us. He asked us: What do you do? Where are you from? He said: Oh! So you came all the way from Japan! You both studied! You even got a master’s degree! We saw him look at the restaurant. But now you work here? I don’t want to be rude, but why? WHY?

“We were like: yeah, yeah we know. We explained that we both studied art and that a master’s degree in art doesn’t necessarily bring you a lot of money. Sure, we could probably get a better paid job in Japan, but look, we’re still here. We know how many hours we need to work to get the income we need. We know things take time. So, no, I don’t really know what’s next, but that’s OK, I’m giving it a try.”