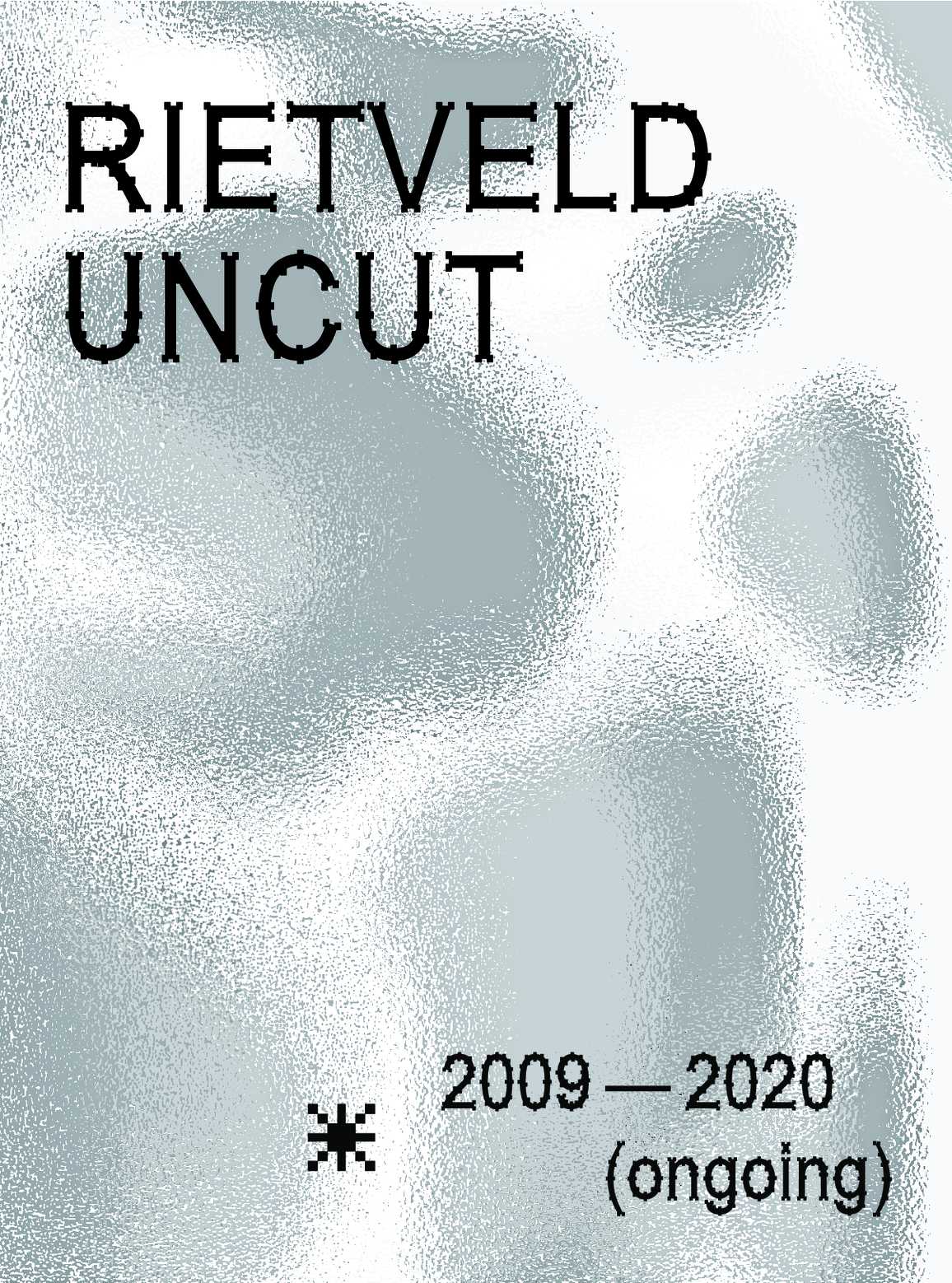 LOOKING BACK AT TEN YEARS OF RIETVELD UNCUT

Since 2009, Rietveld Uncut has been one of the three annual presentation moments of the Gerrit Rietveld Academie besides the Open Day and Graduation Show. The presentation encompasses the entire academy, showcasing both the work of individual students as well as the departments as a whole, outside the academy itself. During Rietveld Uncut, the audience is introduced to the dynamic process and elusive identity that normally remains behind closed doors of the Rietveld building.

Much has changed in ten years: in 2015, Rietveld Uncut moved from the unrestrained more theatrical atmosphere of experimentation in De Brakke Grond to the context of the renowned Stedelijk Museum Amsterdam.

Initially, Rietveld Uncut was thematically inspired through an inventory of the academy’s departments and curricula, conducted by initiating curators and organisers Tarja Szaraniec and Tomas Adolfs.

Since 2014, the many projects of Rietveld Uncut have developed following the themes of Studium Generale Rietveld Academie as the collective source.

The presentation evolved into an event in which students increasingly create work in relation to the world outside of the academy. Throughout all that transformation, Rietveld Uncut is still about process: looking behind the scenes and allowing the audience into the dynamics of the academy and the students' world of thought. ‘Uncut’ represents a raw cut right through the middle of the academy, exposing the making at its core.

Szaraniec and Adolfs graduated from the Fine Arts department a few years before they initiated Rietveld Uncut. Together, they form the independent presentation initiative Plan B, which began with showing the work of various artists within their own Amsterdam-based studio. They later co-founded the publication collective The Session with artist-designer friends. Their Xerox publications evolved into other formats including a large-scale event in De Brakke Grond with bands, film and international artists. The collective questioned the limits of their medium: can a publication take on other forms than print?

Soon after, Szaraniec and Adolfs were asked to shape the public presentation of the Rietveld Academie. By considering the art academy as film set for the first Rietveld Uncut, they translated their interest in cross-disciplinary forms of exhibition. The film set as starting point opened up the dynamics of the academy whose continual transformation usually remains obscure. The iconic building is its only constant. Alumni who visit a year after their graduation are often surprised at how much the academy and its people have changed in their short absence. Every department and student fills in the space in a new way. The academy is, as it were, a set in which countless roles swarm together – actors, technicians, propmakers, scenographers and costume designers – all of whom shape a world.

The making process itself is at its heart. Materials are scattered throughout the academy, and one can find work in all stages of the process, tests and sticky notes with warnings like ‘work in progress’ and ‘do not remove’. This informal charm has no place within classical exhibitions, but fills the air of Rietveld Uncut.

Right from the start the focus has been to show creative processes and interactive work. During the first show in Flemish Arts Centre De Brakke Grond and its theatre, students continued to produce, at times even in collaboration with the visiting audience. Rietveld departments presented themselves in experimental ways based on their collective identity rather than the completed, individual works that visitors would encounter during a Graduation Show. The Fashion department, for example, translated itself into an orchestra, delivering an ode to the symphony of its own studio using the sound of sewing machines, the tearing of fabrics and other making processes. Every year, the students’ unexpected plans could count on an enormous enthusiasm from the technicians of De Brakke Grond who did everything in their power to realize these projects together with the art and design students.

The move to the Stedelijk Museum, from black box to white cube, brought different conditions and new ways of exhibiting. The students gained completely new insights for the future of their art practice from working together with an established museum. This moment was an educational experience: students began to receive intensive feedback and learn how to work in a new context. Eye to eye with an audience that takes every object seriously provides an opportunity to present and to observe the interaction between their work and the visitor.

While Rietveld Uncut continues to transform, its pillars remain consistent. Each new context brings a different education value for the students, their interaction with the public and potential to make experimental collaborations flourish. The special dynamic of the Rietveld Academie is the inexhaustible motivation of Rietveld Uncut — which offers the public a glimpse into the Rietveld world year after year.

THE ACT OF EXPERIMENT

One of the goals has always been to provide a place for the students to meet their audience in a new context. During the first years students were less visible to the outside world. They made work within the context of their curriculum but rarely had collective shows in other places. Rietveld Uncut formed a valuable lesson in the interaction with a new audience as an echo chamber. In recent years, students increasingly take part in exhibition events, both through their own initiative and as a result of a growing interest from cultural institutions. This change may have been accompanied by the emergence of social media, which has contributed to blurring the boundaries between the academy and the outside world. Nowadays, art students seem to have the need, the ability and the guts to position themselves within the city. This different relationship between the students and their audience has created space for a new mission for Rietveld Uncut as an educational trajectory within the Rietveld Academie.

The context of the Stedelijk Museum offers new challenges. Accustomed to an environment with a great deal of personal freedom to experiment within the academy, students gain new insights from the negotiation with different parties and conditions. At times, this leads to wonderful misunderstandings. The students bravely make proposals that seasoned museum staff with knowledge of protocols would not think possible. Because the students within the Rietveld are given the space to dream, they dare to ask questions outside of the Rietveld, which in turn opens new perspectives. During the Friday Night event, the museum stays open late and the exhibition is activated by performances, lectures, presentations and a film programme. Sometimes these interactive or temporary works are shown throughout all exhibition spaces. The various ways of exhibiting form a tableau vivant in which the atmosphere of the academy is brought to life in the museum.

Every year Rietveld Uncut doors open, both the Rietveld community and the public of the Stedelijk Museum gather. The attention with which the varied museum publics – local and international of all ages, art connoisseurs and school classes – experience work is impressive for many students: an advantage of exhibiting in a renowned institute. The art and design students learn a great deal about how their work is experienced and the questions it raises with visitors.

Next to Tarja Szaraniec and Tomas Adolfs, external teachers and curators have always been involved in fostering dialogue with the students. Since 2014, Rietveld Uncut and Studium Generale Rietveld Academie, the in-depth theoretical programme of the Rietveld Academy, have joined forces. Studium Generale takes place during a week each spring, and concludes in a conference-festival with international speakers at the Stedelijk Museum in conjunction with Rietveld Uncut. The themes are based on contemporary cultural, social and political. By linking the Rietveld Uncut exhibition, yet another path in routed through the curatorial process. The students and departments not only represent the dynamics of the academy, but also work on relevant contemporary topics. This is reflected in the theme of 2019, ‘Take a Walk on the Wild Side Fabulating Alternative Imaginaries in Art and Life’ about the artistic, political and social potential of speculative fiction. A year earlier, students responded to the call for ‘Hold Me Now – Feel and Touch in an Unreal World’, which focused on the meaning of touch in screen-based lives. In 2020, students and departments develop projects around ‘Relating (to) Colour’.

Finally, to summarize the selection process, students respond to a Rietveld Uncut open call when the programme of Studium Generale Rietveld Academie becomes public. Students and departments alike propose their plans conceptualized according to a mission statement and a lexicon published by Studium Generale as thematic preview. During the development of selected projects, theory

lectures begin to provide extra impetus and support. Studium Generale and Rietveld Uncut are two sides of the same coin: thinking is inextricably linked to making and making is a form of thinking. During the exhibitions, meetings between the speakers of Studium Generale and students in Rietveld Uncut provide a space in which the student learns to relate to the themes and their own work in organized masterclasses. It is often a special moment for the artists to be; they receive substantive feedback on work and speakers often take the time to share their life lessons and views on artistic practices.

From open call to exhibition, Rietveld Uncut opens up territories in which the students can engage. Departments work together on a collective show, and academy-wide, the presentation bridges the space between it and the outside world. Students from different departments can register as a duo or collective. Their initiative is of paramount importance to the outcome of the final presentation, with potential for working across and beyond disciplines and experimenting with forms of making. Rietveld Uncut challenges students to play in creating something to be seen by the outside world. Collaborations mark all aspects of the exhibition, such as, for instance, the poster and visual identity created by students of the graphic design department every year. Rietveld Uncut gives Rietveld students a taste of the world after graduation, and prepares the world for the Rietveld Academie’s young upcoming artists and designers.