The project Flags of Wasted Lands is a series of thirteen embroideries focusing on the portrayal of ecological disasters directly linked to human presence.

Scientists define the Anthropocene as the current geological era in which the human impacts are at least as important as natural processes. In other words, an era when human and geological timescales are colliding.

Examining Bruno Latour’s research, this project is an investigation on the current multi-layered complex climate regime and it’s direct visible consequences on Earth. The rapid transactional exchange of the globalised condition has accelerated product consumption to the extends where todays socio-economic modus operandi has irreversibly marked our native environment and the collective psyche of how we understand the prospect of ecological urgencies.

This project aims to be a poetic gesture, one of decolonial stance. In such, it attempts to examine territories damaged by ecological violence and to restitute each territory with it’s own sovereignty by reimagining their shapes, colours, textures and even geographies .

The artist’s intention is to have the lands reappropriate the events hereby depicted in the embroideries, not as victims but as survivors of uncanny events.

The flags have a vocation to reclaim the lands’ sovereignties, and to recover the aspect ecological disasters have given them, into their new visual identities.

They are flags of territories that once existed. Visual memories of what is lost.

Reminders of our ever changing state, of the unnatural turn of events that we, as a species, are inflicting to our grounds.

It is the symbolic implication of human responsibility and the lands’ right to their own governance, supremacy, jurisdiction and dominance that is implied here within these unrecognised states. ‘Unrecognised’ - as they are imaginary states, purely mentioned for their wasted states. Unrecognised, as they are not part of the delimitations, and borders that Men have erected. They are here, in this series, invented as such. They are given a space, a voice, an apology. 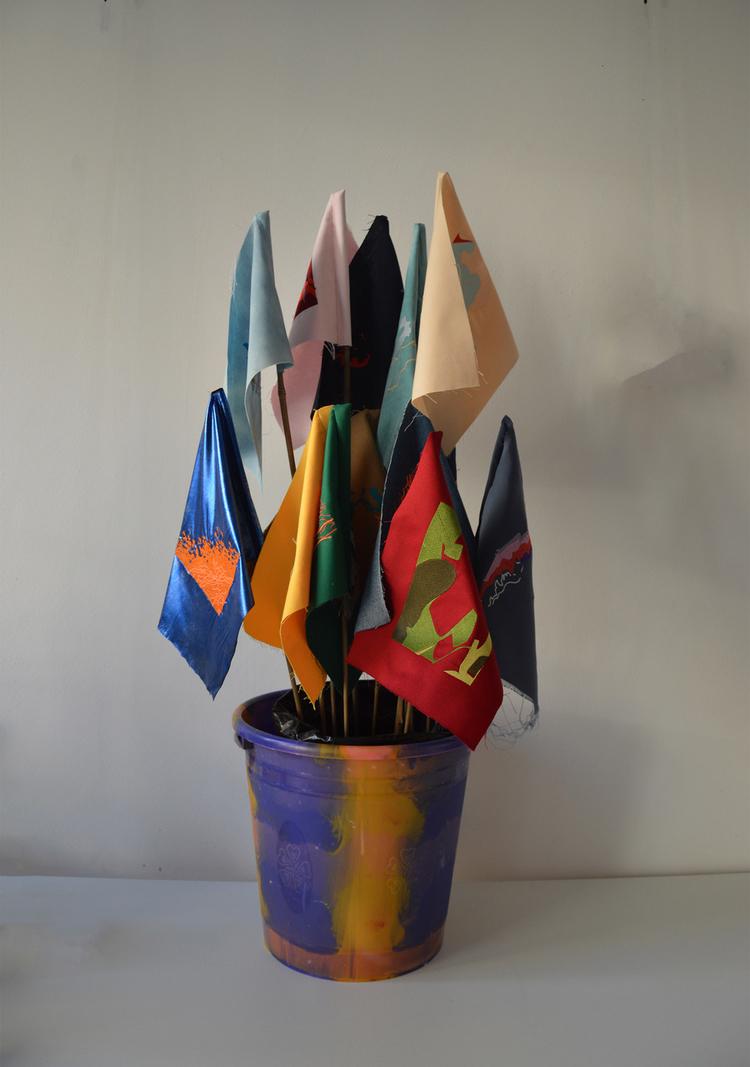 Laura Dubourjal (1994) is a French artist currently in residence at the WOW Lieven Amsterdam. She graduated from the Audiovisual department (VAV) of the Gerrit Rietveld Academie in 2018.

Her works have been on show during the AFW (Amsterdam Fashion Week) for « This is not a Fashion Show » event, in the 2019 edition of the « KunstRai » Amsterdam and the exhibition « Absurd Beings on Skin » in the Kunstcapel in Amsterdam in May 2019.

She creates landscapes, characters and realities in which she offers an escape to the world surrounding us.

The realities she invests allow her to take distance with the problematics of our world, either by escaping it, confronting it or by offering an alternative interpretation of it.

Textile is often the vessel through which she morphs into those lands. Having grown up in a family of actors, she often uses linguistics of the theatre world (costume design, set design, performance, text), individually or combined.

Her website in under construction so go have a look at her instagram in the meantime. @laura.dubourjal