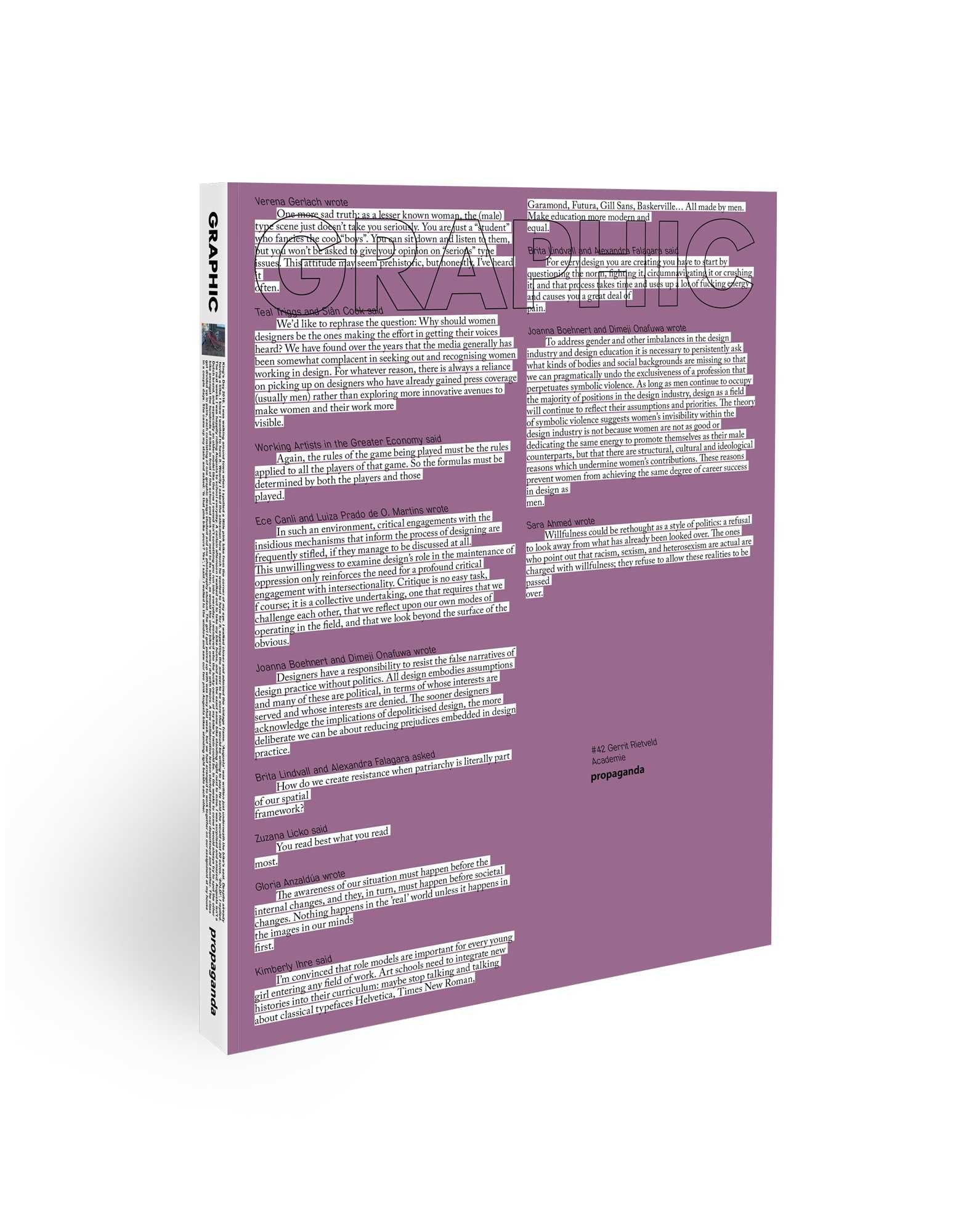 EDITORIALThis is the seventh or eighth (I’ve lost count) try at typing down an introduction to this issue of GRAPHIC, generously offered to our department—thank you! I think it’s been hard because, actually, I don’t really know what this issue will be until it comes back from the printer and I can spend some time with it as a finished thing, when it starts to move in ways beyond our control—a feeling I’ve learned to embrace. This issue has been put together by the students in this year’s graduating class, and each contribution is a response to the question, “What is education in our department?” It’s a pretty open question, and the multitude of responses to it are—generally—very much situated in our department’s present, telling us that learning graphic design at the Rietveld is something that doesn’t only happen in the classroom, hmmm, in fact mostly outside of it? If I think about it we could have played it safer and come up with a concept for the whole thing (like an idea or a system to execute). We could have relied on reproducing the things we already know are good. But in this case the magazine format suggested something else, and the students decided to bravely take this opportunity into their own hands. Each contribution takes this question—this idea—of their education and uses various formats of content gathering, collaboration, image production, planning, writing, transcription, editing, discussion, revision, layout, typesetting, correction and production towards its outcome. The binding of this issue, the container and the fixer of its sequence, comes from an educational context—a particular way of binding school (course) books in Korea—where ‘question’ and ‘answer’ are kept together but can, more importantly, be separated. There are tensions in this binding—‘question’/‘answer’, compliment’/’supplement’, ‘right’/‘wrong’, ‘in’/‘out’—and while it allowed the students to approach the graphic design of their contributions more freely, it prompted many long discussions about how to design and respect the text of a bilingual issue. The contents themselves, their formulation, design and production are the things that should show best how and what the students have learned, and where their interests are situated. I want to believe, and teach towards, the idea that it is the work itself that should be able to communicate. Within this paradigm both risk and responsibility push each other towards outcome, towards publication.Before signing off, I would like to introduce a few lines of text from a poster that both struck me and has stuck with me since seeing it at our mid-semester assessments this year. This sentence was written, typeset and printed onto a kind of fancy wrapping paper by Yunie Chae, a student in our graduation year. What I think both struck and stuck to me is that the sentence attests to a contemporary condition of studying (and teaching) in a field that perhaps only celebrates certain kinds of (mostly unsustainable) success—a field we, as teachers, would like our students to reconsider and challenge. At the moment, in 2018, I can’t think of a more powerful way to approach an education, and to work towards a future practice:

I feel guilt towards my ignorance and lack of knowledge.