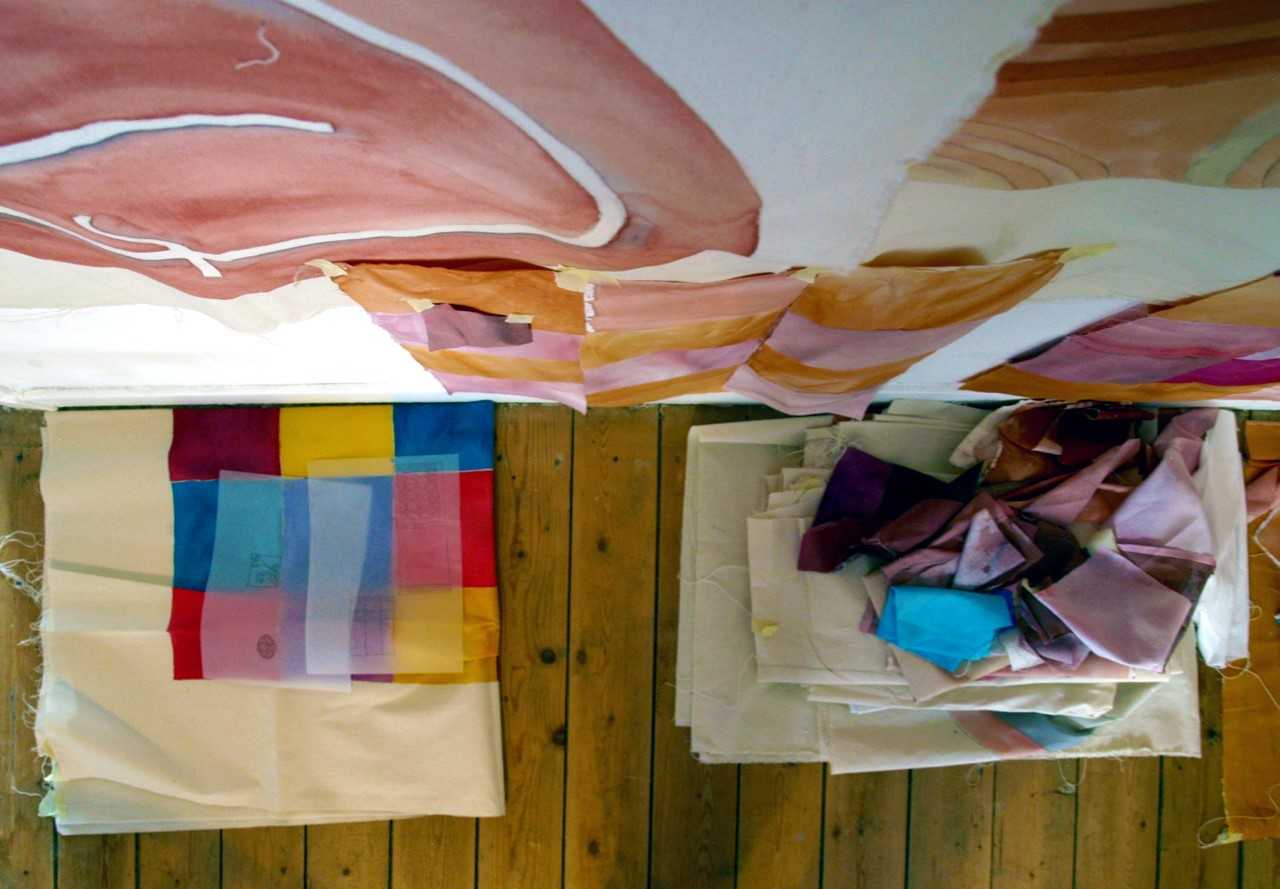 A good seven years after graduating from TXT (Textile), Mila Lanfermeijer invites me to a small, ground-floor townhouse that would normally be used as a homey two-room apartment, but where Mila has dispersed her work in organised chaos over the available space. Tinted linen is stuck to the wall and stacked on the floor. The kitchen serves as a pigment mixing laboratory.

It may not be too far-fetched to say that furnishing a home as a working studio actually reflects Mila’s interest in redefining preset ideas about function. Her ongoing research on questioning and subverting the functions and values most commonly attributed to textile recently yielded an exhibition at the SEA Foundation in Tilburg, concluding her residency there.

Pleated, skirt-like garments were stuck flat on the wall. Spread out into large, static circles and crescents, they reveal their geometric blueprint before the act of being ruffled into shape with seams and zippers, or draped three-dimensionally over the volume of a body. Instead, the skirts become two-dimensional artworks, hard-edge paintings. Or is it the other way around? Are these hard-edge paintings possibly on their way to becoming pleated skirts? It is exactly this tipping point in perception that Mila aims for.

“We assume that objects, like clothes, have certain functions,” she explains, “which then, presumably, excludes them from other kinds of functions. I question this. I wonder whether objects defined as one thing, could, in fact, also be something else. By changing the context of an object, the object itself changes too.”

“No, I should say: by changing the context of an object, you reveal another side of it. Whatever the side, it’s already in the object itself. In that sense I think that, for instance, a tailor is just as capable of making art as an artist, even if it’s not his intention. Instead of having these values depend on who the maker is, I think the values are in the made thing itself. They’re enclosed in the object. In, let’s say, regular contexts you may not see them, but in others you can.”

Was becoming an artist already enclosed in you? Did the context of studying at the Gerrit Rietveld Academie reveal that?

“Well, if you put it like that… But not in the sense of the artist-genius. I mean, yes, apparently it was a side of me, which revealed itself because I gave it attention, but not because I consider myself a born artist or anything like that. Maybe wanting has something to do with it. But I don’t think being an artist is a predefined thing.”

You work with textile, a material that in many ways does seem bound to a certain predefinition, or at least tainted by cultural perceptions of what its function is.

“It wasn’t until I had graduated from the Rietveld Academie that I started to notice how textile is perceived in a more political sense. Before, at the Textile Department, my main interest was exploring the intrinsic values of material itself, which didn’t seem at all restricted or confined to any particular context.

Only after leaving the Rietveld and entering the real world, so to speak, I was confronted with a whole new system of beliefs. Not that the intrinsic values of textile were denied, but other values played their part as well. The fact that I am female, for instance; a female artist working with textile.

To realise how tied up in politics textile actually is, was a very strange sensation to me. Somehow, I’d never experienced those connotations before. It wasn’t an issue at the Rietveld, apparently. Looking back, I think that’s great. I mean, there was only one boy in my class, but I never gave this a second thought.”

If a function based on politics or gender is the expected one for textile, wouldn’t you rather reveal other, less predefined sides?

“Well, now that I’m aware of it, the fact that textile is bound to a whole set of gendered and political values feels unavoidable to me. It would be strange to continue my work with textile and not consider its political context. In a way, I’m obliged to touch the subject. Becoming aware of the system that textile is part of, isn’t something I can undo.

But it certainly made me appreciate the attitude of the Rietveld Academie more. I don’t know, I might have been naive at the time, but it felt like there was no hierarchy, no polarisation during my studies there. It was very free and unrestricted, undefined in a sense. That fluid state of mind is still inspiring to me. I feel like that’s how it should be. It feels whole.”

Whole, or in between perhaps? Being able to touch all subjects from all sides, everything at once?

“Everything at once, yes. With my work I definitely aim to unfix boundaries, to be fluid as well. As a working method, this means I’m constantly going back and forth between a more rational, theoretical approach and the actual, tactile material. I try to redefine the systems we usually take for granted. Like the supposed opposites between masculinity and femininity, or art and craft. By fragmenting the functions and rearranging them, there’s space for other, more intrinsic functions and definitions of an object.

When I was in India, I visited a family that practises a very traditional method of painting textile. Craft is still held in the highest regard there, it’s something that is passed on with pride. One of the boys learned this craft by looking very closely at his parents, trying to mimic them exactly. But in his mimicking process some kind of alternation was inevitable. I think that exactly in the moments that he failed, in the act of reproduction, a certain creativity occurred. In that moment, something new happened.”

Was there a moment in becoming the artist that you are now, that something new happened to you? That you yourself became fluid, so to speak?

“Well, being the daughter of a painter I thought that I sort of knew what I was getting myself into when choosing to study at the Gerrit Rietveld Academie, but the actual experience threw me back to a zero point. It felt like starting from scratch. I remember being very confused all the time. It was wonderful, difficult, unusual… Again, everything at once.

But in a way, as a result, I learned that there are countless paths that lead to Rome. In that fluid state of mind you can choose direction and take it from there. You can decide which side you want to show, which subject to touch.”

1988 born in Amsterdam
2007-2011 TXT (Textile) at the Gerrit Rietveld Academie
2009-2010 Honours program Art & Research at the University of Amsterdam
2011 nomination GRA Award
2012-2014 De Ateliers
2015 Stipendium for Emerging Artists
2018 Artist in Residence at the SEA Foundation Tilburg: solo show Ever so Humble, Ever so Proud
currently: teacher at AKI Academy of Art & Design