RESEARCH FELLOWSHIPS AT RIETVELD AND SANDBERG

The research fellowships are a Sandberg/Rietveld initiative to pursue different knowledge practices involving topics such as Artificial Intelligence, The City and New Materials. From both Rietveld and Sandberg a few candidates are selected to research one of the topics and share their project with the students and the community. This fellowship symposium is an ONLINE EVENT open to all Rietveld and Sandberg students. The programme and live stream link will be shared prior to the event. 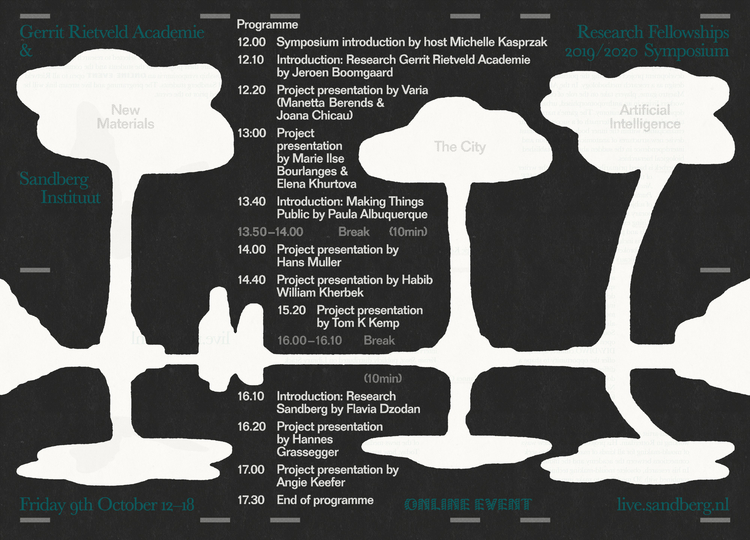 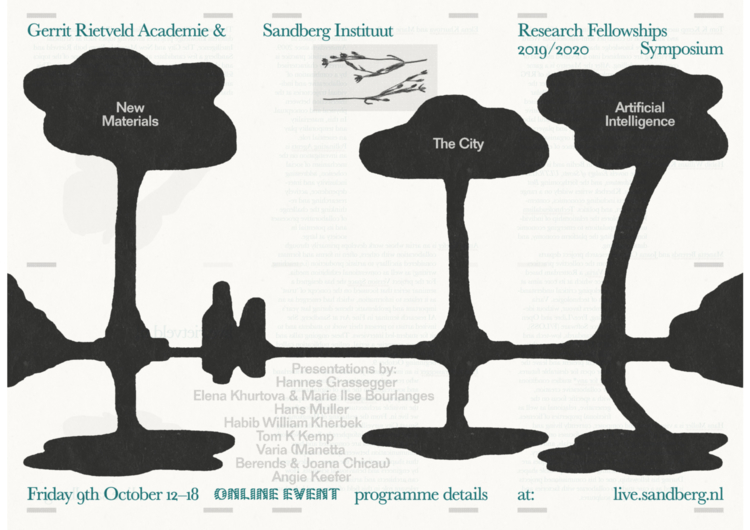 Tom K Kemp uses roleplaying game design, improvised filmmaking and animation to construct semi-autonomous Weird fictions, where knowledge sharing and collaborative storytelling are combined into a deviated method of complexity modelling. After the Maestro is a game development project exploring the potentials of RPG design as a research methodology. In the After the Maestro game, players take on the role of cellular workers living in an anthropomorphised, urbanised depiction of human anatomy. The game’s narrative takes place during the aftermath of a successful labour emancipation within the inner body, and players must devise new structures of anatomical organisation and interdependence in the sudden absence of established biological hierarchies.

Habib William Kherbek is based primarily in Berlin and is the writer of the novels Ecology of Secrets, ULTRALIFE, New Adventures, and the forthcoming Best Practices. Kherbek writes widely on a range of subjects including economics, contemporary art, and politics. Technofeudalism Rising explores the relationship of individuals and populations to emerging economic forms including the platform economy, and data brokering.

Manetta Berends and Joana Chicau’s research project departs from the collective practices at Varia, a Rotterdam based space which at its core aims at developing critical understandings of technologies. Varia members favour, without idealising, Free/Libre and Open Source Software (F/LOSS), open standards, low-tech and DIY/DIWO culture, as they offer the opportunity to shape a different present and leave the door open for desirable futures. Not for any* studies conditions for collaborative creation, with a specific focus on the generative, relational as well as frictional properties of licenses.

Hans Muller is a visual artist and composer, currently living and working in Rotterdam. His project focuses on new ways of mould-making for all kinds of materials, and to seek connections between the academy and the industry. In his research, obsolete mould-making techniques are combined with 3D modelling to make impossible shapes. During his fellowship, one of his commissioned projects is used as a case study to collaborate with factories and work on highly complex sculptures.

Elena Khurtova and Marie Ilse Bourlanges have operated as an artist-duo based in Amsterdam since 2009. Their artistic practice is currently characterised by a combination of collaborative and individual trajectories at the intersection between physical and conceptual. In this, materiality and temporality play an essential role. Pollinating Agents is an investigation on the mechanism of social cohesion, addressing inclusivity and interdependence, actively researching and re-thinking the challenge of collaborative processes and its potential in society at large.

Angie Keefer is an artist whose work develops primarily through collaboration with others, often in forms and formats considered ancillary to artistic production (i.e teaching, writing) as well as conventional exhibition media. For the project Version Space she has designed a seminar series that focussed on the concept of ‘trust’ as it relates to information, which had emerged as an important and problematic theme during last year’s AI research seminar in Fine Art at Sandberg. She invited artists to present their work to students and to sit for student-led interviews. These ongoing talks and interviews comprise a serial, online publication called Version Space, publicly distributed on Library Stack beginning October 9.

Hannes Grassegger is an investigative journalist based in Switzerland who researches questions of autonomy, power and sovereignty in the age of digitalization. In his project Infosphere Grassegger explores the invisible architecture of information flows we live in. From the reshaping of Hongkong as a Smart City surveillance system –to the rewiring of the news media infosphere by Social Networks. Today, how spaces are connected and how communication between spaces is shaped—thus shaping actions in the space—is developed by engineers and behavioural scientists. How can architects and artists as urban actors claim a relevant role in this field of action and help shape these spaces?

About The Research Fellowship project

The Gerrit Rietveld Academie and the Sandberg Instituut piloted the 'Research Fellowship project' in 2018. The Research Fellowship project is an annual event that supports staff, alumni and third parties in the development of their artistic practice by emphasising the field of Artistic Research. In the first iteration, each department at the Rietveld Academie and Sandberg Instituut were asked to put forth candidates; to which many proposals poured in. Of the ten proposals that were honoured, the Research Fellowship project 2018 appointed three fellows from the Rietveld Academie: Riet Wijnen, Aliki van der Kruijs and Beny Wagner. The Sandberg Instituut appointed six fellows: Angie Keefer, the duo Eurico Sá Fernandes and Gamze Baray, Flavia Dzodan, NXS WORLD, Jules Sturm and Bitnik. The fellows received funding to develop their project two days a week for three months.

First, it aims to inspire their alumni and staff.

Third, to actively support Artistic Research practices, as it offers visibility to students about different kinds of research attitudes (should they want to organise their practice in such a way.)

The Rietveld Academie and Sandberg Instituut acknowledge that there is importance in establishing and nurturing a research environment. To conclude the first round of the Research Fellowship project and to showcase the fellow’s findings, the exhibition and symposium hybrid ‘What is research?’ took place on April 12th 2019, organised by curator and writer Angela Jerardi. This afternoon sought to accentuate the polyphonic nature of the fellows, and offered an afternoon of presentations, talks, performances and a small exhibition.

This text is part of a small publication made by the Gerrit Rietveld Academie in March 2020. The publication features several interviews conducted with a selection of the 2018 fellows. The publication can be read and downloaded via the following link: Research Fellowship project publication (pdf).