Making a website for an art academy, how hard can it be?

— part of News
Apply Search Nl Menu
Gerrit Rietveld Academie
/ Making a website for an art academy, how hard can it be?

It’s a public test. Please have a look and let us know what you think; public[at]rietveldacademie.nl

The website is designed by Joel Galvez. This is his blogpost explaining his ongoing thought and design process. Galvez graduated from the Graphic Design department in 2008 and it now one of its teachers.

“Last time, in 2015, it went a bit too fast, so this time we’re doing it slower. Therefore, we’re doing this in two steps: First we try this update the front-page and the department pages, and once we know more about how it works, we will do the rest of the website including some adjustments.

— If you study or work within the academy, there are now three main ways you can add visual content to the website (and the front-space):

1. Book the front-space. You can book it in advance for a week at a time

2. You can add events to the calendar

3. You can add your projects to the department pages, and the last uploaded pace is displayed on the homepage. 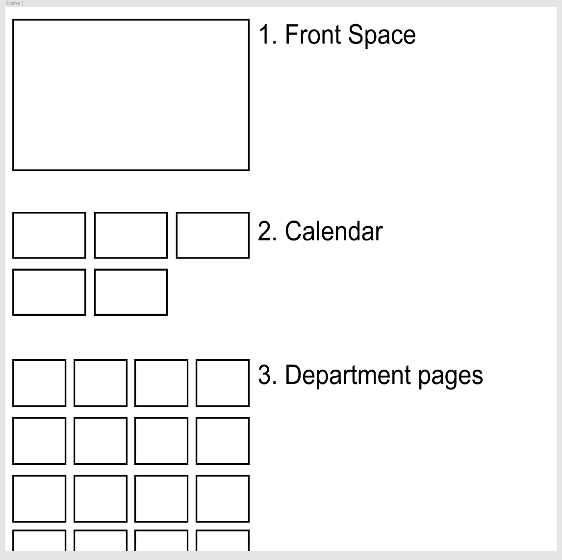 More info on how to book the front-space

— The website site should still look okay if no-one has booked a certain week. Less stress for Public Rietveld (they don’t have to make sure the front-space is always booked).

— The front-space is now one single spot instead of a group. There isn’t that much interest in creating “curated collections”.

Visually, the idea is based on the tension between giving space and taking space. This proposal is from 2018 (yes, slow!).

My name is Joel Galvez, and I’ve been involved with working on this website since 2010. I graduated from Graphic Design in 2008 and since a couple of years I teach in the Graphic Design department. There, I do a mix between platform critique and designing for screens.

In 2010, me, Alex Shoukas, Per Törnberg and Kjartan Fridrikson got the job to make a new website for the Rietveld Academie. Luna Maurer (who was then teaching in the Graphic Design department) was also part of it, sort of supervising a bit from the side.

In this version, anyone in the school (staff, student or teacher) could add anything to the front page. I think the idea came from Luna, but we were all pretty excited about it. The result looked like this: 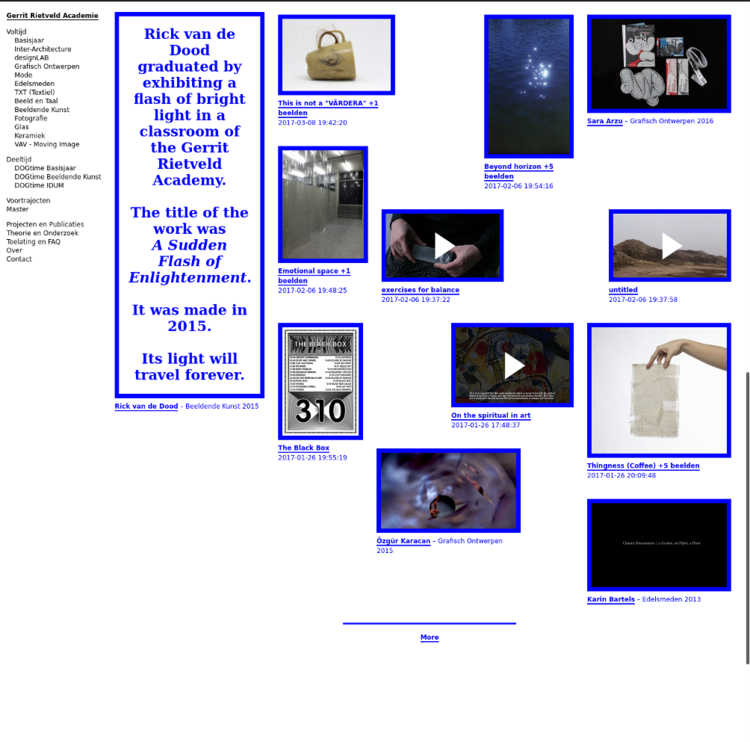 This concept was also born in a tumultuous time at the Rietveld Academie with an ongoing discussion about whether the academy should move to a new location or not.

Many teachers were against the move, including Luna and Linda van Deursen who was the head of Graphic Design at the time. This ‘anti-move’ movement wanted the Academy to be more anchored in the history and stay in the building designed by Gerrit Rietveld, who also gave it its name. It had some grassroots characteristics and was manifested in a large colorful ring-dance outside the entrance of the school. I also danced, hand in hand, and I remember wondering if history mattered that much to me, but nevertheless I sided with my teachers. The demonstration worked, and the school is now still in the same location today.

In this non-hierarchical spirit, the website was made. The site became quite popular. To trust the student to add whatever they wanted to an institutional channel felt like a novel idea, at the time. It worked a bit similar to a large collective Instagram feed.

No-one could post on the Rietveld Academie website anonymously. I remember my smug realization that, since we had the email of all students, we could tie people to their real identities. This exact idea was used in “The Well”, (considered an important precursor to the internet) where the credo was "You own your own words.".

Just like in the 1970s, we had exported the work to ‘moderate’ the work of the individual students to themselves. This worked really well, as art students are very aware how they are perceived. I have since then been asked many times why we changed it, and the reason is because it has an invisible flaw: The students who don’t thrive in this type of environment aren’t seen at all.

Some years after version 1.0 was launched it was still popular and worked okay. But it was a bit outdated technically. Also, the submission from students started to wane. Can’t say why exactly, but I suspect with the advent of Instagram, posting to an institutional front page became less thrilling. I suppose everyone became more preoccupied with their own Instagram accounts. The first version is still an amazing archive

In 2015, The school made a call for a new version of the website and me and Anja Groten answered with a proposal, it was a step away from the existing social media logic.

A lot changed between 2010 and 2014. The drawbacks of social media started to reach public consciousness. The arts turned outwards and ‘activism’ became less of an ugly word, instead ‘conceptualism’ became an ugly word. It became clear that (sometimes invisible) power imbalances made it harder for some to speak their mind.

So, In 2014 it was a lot less cool to have a website that worked like Instagram. We needed something else, something that could allow for collectivist support structures without removing the possibility for individual initiative.

We were looking for something similar to a ‘stage’, like a theater stage. A stage has a machinery around it, there is the institution supporting it. Someone can ask to use the stage, and someone can be asked to join the stage. It works equally well for a group of people as an individual.

We found a model for this stage between the buildings in the Rietveld Academie and Sandberg Instituut: The “plank”. 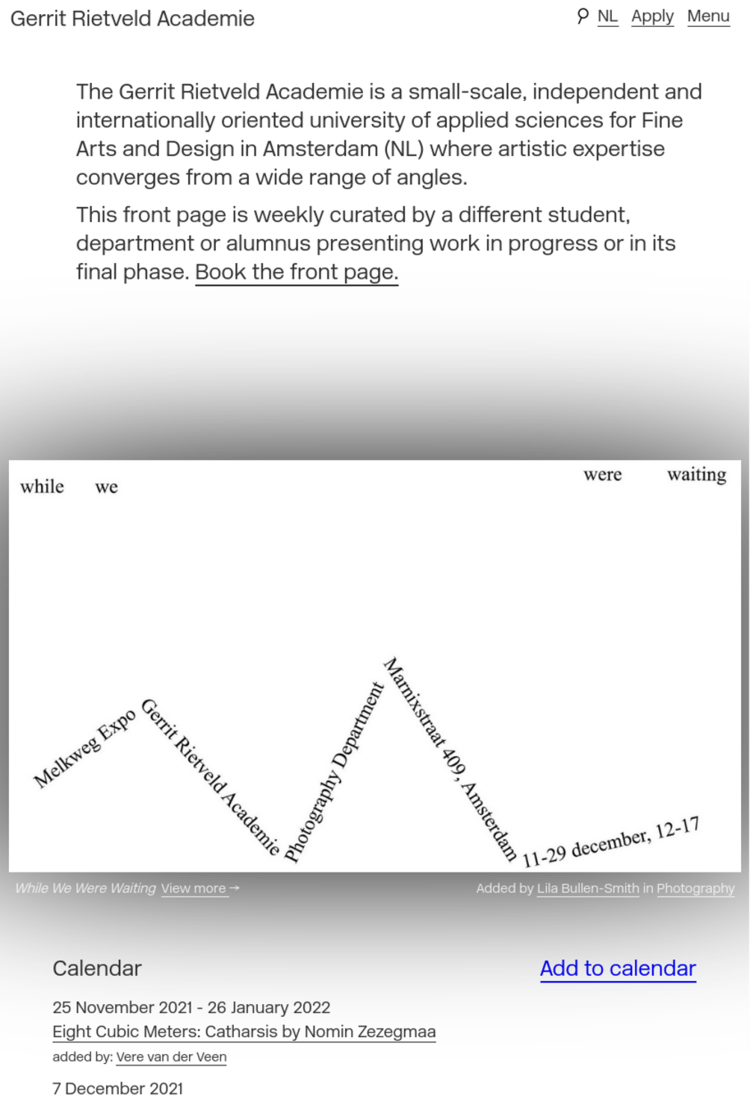 Somehow somewhere students works make their way to the plank with some regularity. We imagined this was bit of a mix of individual initiative and institutional support.

We used this model, so anyone working or studying in the academy could now book the front page for the duration of a week beforehand. The key page is the booking form: 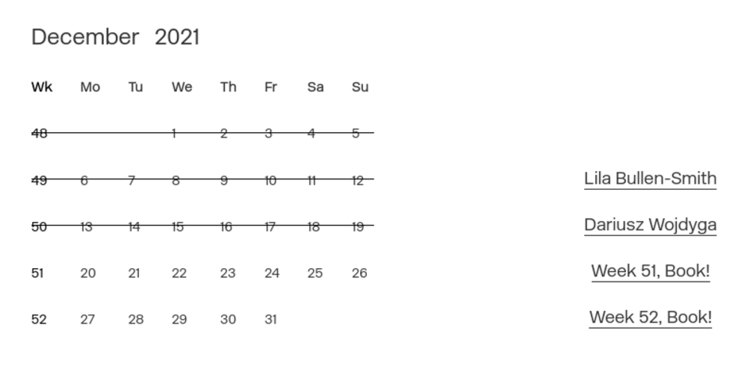 Once someone books the front page, the academy still has a chance to react and open up a discussion about what is going to happen that week. The whole procedure becomes a bit more considered than an Instagram post.

We launched this in 2015 and it was a less successful launch than the the version in 2010. The main reason was that it was a bit unfinished. We had focused a bit too much on the booking mechanism. We had also given it too much space on the site – almost 100% of the front page,

So the current update is to soften the edges of the last version but keeping the same basic idea: You can book the front page (now called front-space) if you study at the Rietveld Academie. But there is more a variety of ways to publish content, and less of a competition and also hopefully not entirely relying on individual initiative.