Styrmir Örn Guđmundsson / The Story of a Storyteller 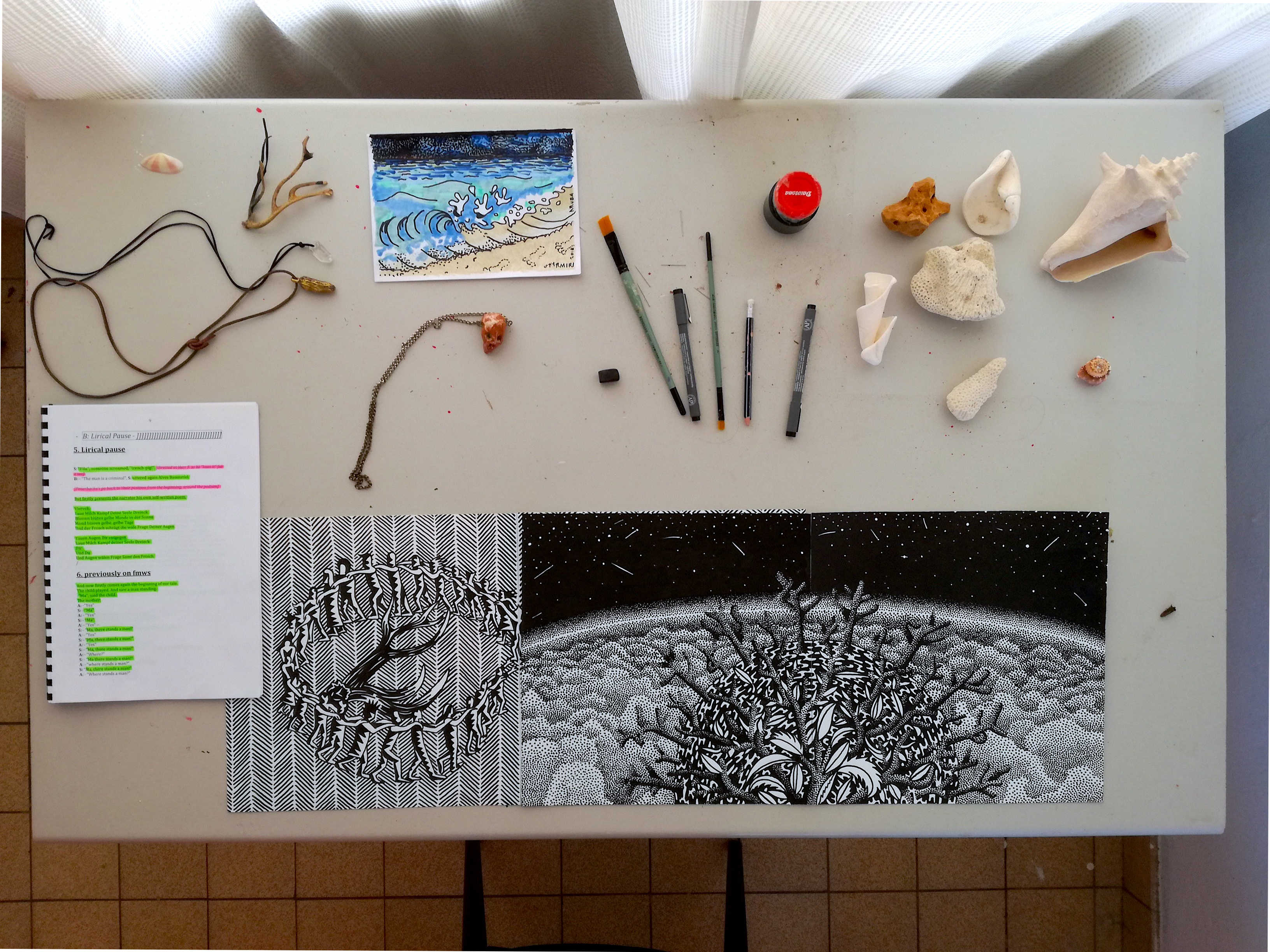 It is the day before an exhibition on Aruba, where Styrmir Örn Guðmundsson is currently giving a workshop at the art and design foundation Ateliers ’89. His studio for three weeks is cool and quiet and he has arranged a collection of shells on the table, brought in from the beach.

Styrmir is a storyteller and it reflects in all his work. His drawings are like graphic novels, his sculptures play with make-believe, and his performances have something mythical about them, in a magician kind of way, offering “special care” and “special knowledge” to his audience. There even seems to be a deliberate chronology in the placement of his shells and pens on his temporary table under the Aruban sun.

More recently, Styrmir has been using rap lyrics to tell stories. He will soon finish his first album, complete with drawings for every song, which will mark the end of the musical performance tour ‘What Am I Doing With My Life?’.

Looking back on the beginning of his artistic career, starting close to thirteen years ago with his admittance to the Basicyear, his own story unfolds.

Let’s say a chapter of the story of Styrmir starts at the Gerrit Rietveld Academie. What was the prologue? What brought you here?

“After high school I wanted to leave Iceland to see the greater world. I had lived in Rotterdam as a kid because my father had a job there for two years. So when I decided I wanted to study art, the Netherlands seemed like a straightforward choice. I was invited for the entrance exam at the Gerrit Rietveld Academie, together with my cousin Arnar Ásgeirsson. My grandmother got us on board of a big cargo ship that was headed to Rotterdam. Usually, only workers are let on those ships, but we were allowed to travel along as secret passengers.

It was a five day trip over the Atlantic and we made our admittance assignments on the way: five aquarel paintings that we rolled up into bottles and threw off the ship, in the middle of the ocean. The captain gave us the right coordinates so that they would hit a current going into any possible direction.

When we arrived at the Rietveld we were dressed as sailor boys, with only our stories to tell. We showed pictures from our trip and spoke about those paintings floating somewhere at sea, waiting to be found. The committee didn’t believe it, but fortunately they did accept us.

And now the proof is here! Two years ago a married couple and their dog, Brody, found one of our bottles washed up on shore at Rathlin Island off the coast of Northern Ireland. It was Brody who grabbed the bottle and when they got home, Tania and Fergus saw that there was something inside that the dog didn’t want to let go. It was pretty big news there, even the local paper had written about it.”

A plot twist already! Back to the beginning, your first chapter at the Gerrit Rietveld Academie. Were there any main characters, a key scene perhaps?

“Yes absolutely! Respect to my teacher Hans Muller for pushing me into music. Even after I graduated from the VAV department, we remained good friends. When I was starting up as an artist he continued to give me feedback and support.

And, come to think of it, it was during my time at VAV that I had my first acquaintance with rap. I started a cover band of the Wu-Tang Clan with seven friends. We were, supposedly, the one and only hip hop cover band, because in hip hop you just don’t cover, it’s sacrilegious or something. Of course, it was mostly fooling around and having fun, but we took it real serious and had about four concerts in Amsterdam, in quite nice clubs like the Sugarfactory and Studio K. We thought it was a brilliant project and, to be honest, I wasn’t doing much for school at the time. It was my second year at VAV and people typically space out then. At my assessments I could only present the band and most teachers had never even heard of Wu-Tang, so I got a warning that year.

But, somehow, it did lead me to what I’m doing now. It’s like I’m revisiting that scene from my chapter at VAV, in the chapter I’m in today. And everything worked out in the end. In my last year at the Gerrit Rietveld Academie, I worked a lot and everything was fine. I had a really nice graduation. I enjoyed my time there very much; the social life and friendships that came out of it…”

Was pursuing your work as an artist after graduation more like a next chapter or a new story altogether?

“After graduation I didn’t really know what to do with myself, which is probably a classic syndrome for many students. I applied to the Sandberg Instituut and it was during my studies there that I became aware of performance as something I could work with. Before, I was mostly producing videos and drawings, fooling around with strange experiments, making animations and performing in front of the camera, but I hadn’t been conscious about performance art as a form in itself.

In my last year at the Sandberg Instituut I visited dOCUMENTA 13, and that’s when, all of a sudden, I got sucked into a deep fascination for the world of performance. Many of my class mates were dancers preoccupied with performance, and because I often went to see their work, my eyes were slowly opening up to the topic. It was at dOCUMENTA that I saw a performance piece by the artist Walid Raad, titled ‘Scratching On Things I Could Disavow’, and was totally blown away. He was telling a complicated story and the way he was narrating it activated our imagination to really dive into the works that were exhibited around him. It was, like — wow! — to simply use yourself to bring people deeper into the experience of an art exhibition. It got me believing in an old way of making art: live storytelling! I was always into telling stories anyway, both in my drawings and video’s.

After that, I was invited to show my work here and there in the Netherlands, mostly in small artist-run venues. I have always believed that if you show your work to the public, it is very likely that some kind of chain reaction takes place. Somewhere along the way a new opportunity appears; it might be another exhibition, or a commission, or some other job. So, very slowly, your practice as an artist accumulates. It’s a privileged practice, but also a painful one. You’re constantly in self-doubt and you don’t really make money. New chapters are hard to notice, perhaps only when you look back.

For me, the present tense of an artistic practice is like a slow mutation process, a permanent alteration. I reuse and recycle my work all the time. A work that starts out as ink on paper may one day become an absurd song of sound and music. But they say that if just one person likes what you do, you are successful!”

You are currently giving a workshop on Aruba. What is the most important story you want to teach your students?

“Indeed, from time to time I’ve been employed as a teacher, but I don’t look at myself as a teacher. Rather, I see myself as someone who activates or stimulates. In most cases, when I am supposed to be teaching, I feel like I have nothing to tell the students that they don’t already know. But I love activating and pushing people into work and practice. The stimulation comes with humour, love and joy for our privileged ability to be artists.

To me, it’s most important to realise that art is never about competition. No artist is better than the other. Art is just like mental gymnastics; it’s able to turn people into healthier thinkers, able to challenge science and politics. Therefore, art can make the world a better place.”

Any cliffhangers for what’s next?

“Oh yes! I am jumping off the cliff into a big transition moment for myself. I’m sentimental because, after four years of living in Warsaw, I am leaving dear friends to move back to Iceland. My girlfriend is Polish so you could say I once moved there for love. It was during a time that we were both struggling in Amsterdam and just felt like a change. Amsterdam can be a tough city for poor artists. It was a spontaneous move, really, neither of us knew Warsaw. But the city has everything to offer. It was a big adventure to live there; I met a lot of people and participated in the local art scene.

So yeah, I’m kind of sad to leave, but it’s an extremely exciting moment. I will return by ship, this time with my car inside, with cardboard boxes and artworks inside of that. But after all those years I won’t be throwing any plastic bottles into the sea.”

The next thing Styrmir will throw into the world is his brand-new album, downright suitably titled ‘What Am I Doing With My Life?’.