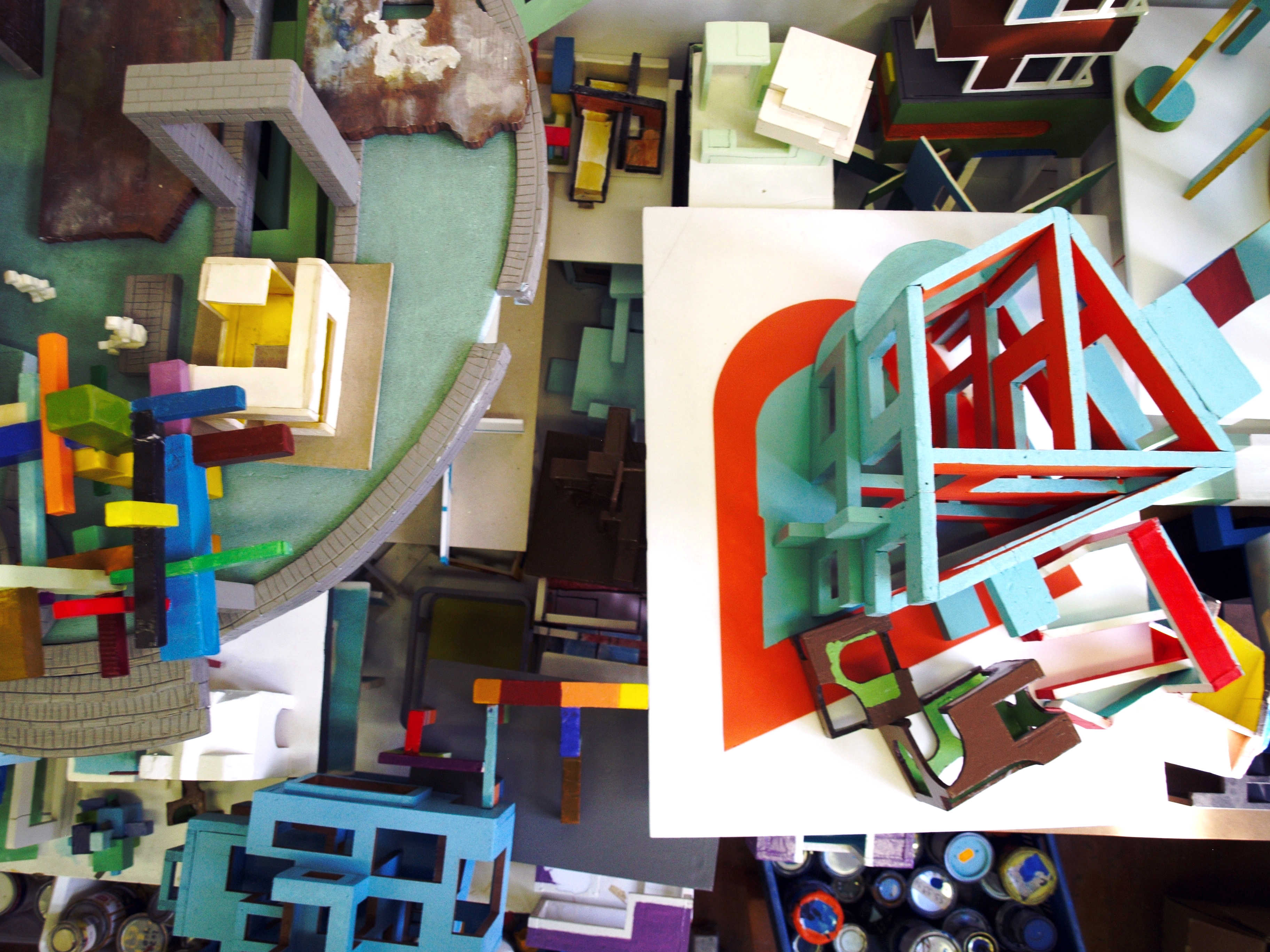 Two years ago I heard Krijn de Koning on the radio. He was showing a new series of sculptures at the time, composed of upright and transverse beams and blocks in all shapes and sizes, their surfaces painted with vibrant colours. He was asked to explain the way he perceives space. Krijn has a bright, vivid manner of speaking, as if frolicking through his train of thoughts, and he answered: “Actually, I just look and wonder. Where am I? What is this place? What’s happening here?”

Space aside, how do you perceive time?
“I remember one day looking at an image, a drawing in a book, representing a car window. Now imagine that car window being our view on the world, the now so to speak. Looking through the window towards the front, to where you are headed, you can discern events that will take place in the future. These events keep coming closer and closer, until they pass your window, the now, and then fade away behind you. That’s how we tend to see time in the West, like a journey, very logical actually. But very different from Indian culture for instance. Their perception of time was drawn in that same book. It was an image of a fire-spitting dragon. The notion of time was collected in the smoke protruding from the dragon’s mouth, as if being produced in the heat of that one moment and containing future, present and past all at once: what was is still part of the now, and the now is constantly being produced.

I like this idea because it means that, in a way, our past is still with us, my young self is still part of my present self, my memory is actually being made in this very moment. I think that’s a much less fatalistic approach than watching time speed by through a car window. Not sure if that’s really what those drawings meant, but it’s certainly a thought that I find extremely interesting.”

Do you look back at your studies at the Gerrit Rietveld Academie that way?
“I think that, on the one hand, I’m inclined to search for the logical effects, the direct consequences of my studies there. But you know, maybe it’s not at all so logical, not at all so fixed. My time at the Gerrit Rietveld Academie is a thing quite ambivalent to me. In a way, it’s still part of me now, not something solely from the past.”

This approach of not being fixed is essential to Krijn’s practice. His work interrupts an environment by adding sculptural, architectural, and colourful constructions to a given location. The new shapes and angles, the new voids in between them, suggest new possibilities for seeing and understanding the place. What may have seemed fixed at first, as a site, a placid landscape, is recomposed in the space that shapes itself around new surfaces and colour hues. It is exactly this, this act of redetermination, that is the work of Krijn de Koning. In a sense, he unfixes space.

Your sensitivity to space is evident in your work. Are your memories spatial as well?
“Well, my memories are definitely visual.” Krijn stops to think for a moment. “You know, I was always drawing. I wanted to draw, I wanted to become an artist, even though I didn’t really know what that meant back then, but I was drawing all the time and just knew that it was what I wanted to pursue. What I also knew is that I wanted to study in Amsterdam. In those days Amsterdam was the place to be. It was definitely the biggest, roughest, coolest city of the Netherlands, or at least, that’s what I thought at that age, so I applied to the Gerrit Rietveld Academie. You had different departments back then: Painting, Sculpture, Illustration… The last one seemed like a good choice. I got turned down at first, but a year later I was accepted to the Basicyear. That was super fun, right?! I really loved that year, even though the illustration classes turned out to be quite decent, not at all the rough and cool that I had expected from Amsterdam. I decided to go to the Audio Visual department instead, which was very open, very free, similar to the energy in the Basicyear. That suited me perfectly. It was exactly what I was looking for, what I found at the Rietveld, and what is still part of me now.”

Future, present, and past all at once?
“Yes, true. And no fear to go for it! A lot of insecurity, but no fear. Luckily, that’s something I think I was born with, but it was definitely encouraged by the Rietveld, too, by extraordinary teachers like Jos Houweling and Moniek Toebosch. That free, fearless attitude was really important to me because it was the eighties and the art scene was suddenly very concerned with this new idea of marketing your work, you know? You had to have a strategy, you had to learn how to define your work in three sentences, things like that. Later, when I continued my studies at the Ateliers ’63 and in Paris, I did start reflecting on my work more, also in that sense, about its meaning and its consequences, and I do enjoy thinking about these things now. But the fact that before, at the Gerrit Rietveld Academie, I was able to be so fearless and free proved itself to be really helpful to me, to not become rigid in those thoughts. Everything was possible, everything was celebrated. I still appreciate that attitude very much. That too is still part of me now.

And speaking of space, well… At one point my drawings started to become three-dimensional. That meant that the simple, imagined reality represented on a piece of paper turned into a much more complex imagined reality, or rather, an illusionary reality: the so-called real world. In this reality you can touch and hold, you can relate to things physically. That realization was amazing, and funnily enough that actually happened while I was studying at the Gerrit Rietveld Academie. I had just come back from a journey across Tunisia, Algeria, Morocco, Italy, and Spain. The trip took about three months, but the Rietveld was totally supportive— come to think of it, that’s pretty fantastic! During that journey I was constantly drawing directly on things that I found, things that were at hand, and then taking pictures of those things, with the drawings, in their surroundings. I was always alert, always seeing new things, strange and wonderful, and I realized that this is how I wanted to continue working. Right around that time, the Gerrit Rietveld Academie had organized an exhibition for my class and I decided I didn’t want to show a work or a drawing I had already made, I wanted to look at the space, see the space, and use that to create something, use the place itself.”

That sounds like the work of Krijn de Koning now?
“Yes, that was a crucial moment for me! And I doubt whether the Rietveld was really aware of what was happening, but it certainly facilitated this moment. So yes, it all started out visually, in my head, with the drawing — that was all in my head. But in the end it was all about space, this complex, illusionary reality. That, indeed, is how I remember it. Funny, to think about these things now, afterwards… I don’t think I could grasp the significance of it back then, even formulate it really, but now I can, now it makes sense — now as in a fire-spitting dragon’s now.”