The main building was designed by architect and furniture designer Gerrit Rietveld between 1950 and 1963 and completed in 1966. It is the largest of Gerrit Rietveld’s buildings. There was a long period of preparation between its commission and its completion, during which important developments took place in Rietveld’s way of designing. Gerrit Rietveld did not live to see the building’s completion, as he passed away while construction was still going on. The academy moved into the building in 1967. When the school became part of the higher professional education system in 1968 and was given the status of Academy for Fine Arts and Design, the name was changed to the Gerrit Rietveld Academie in honour of Rietveld. Much of the building was renovated in 2004. 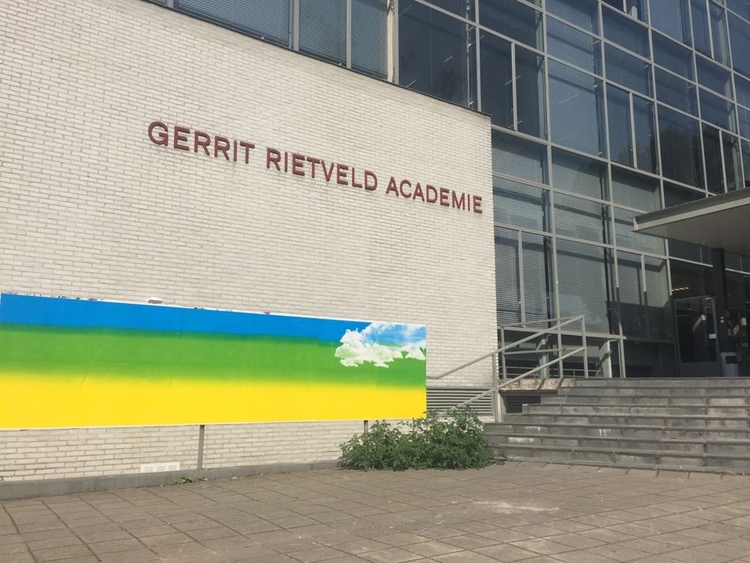 The second building was designed by Benthem Crouwel Architects and built in 2003 as an expansion of the Rietveld Academie. Studios can be found on the north side of this building, and offices in the south wing. Reception can be found on the ground floor. The south and east facades of the building are clad with 16,000 cast glass elements.

The third Rietveld Academie building links the existing buildings and the grounds in between, forming a single entity. It has been in full use since January 2019. The building houses, amongst others, the library, the robotics workshop, the wood workshop, several project spaces and the auditorium. The Sandberg Instituut occupies the first floor of the new building.

The FedLev-building, located on the southwest corner of the plot on Frederik Roeskestraat that previously comprised parking spaces, balances the spatial relationship of the whole. Its open architecture is consistent with that of the historical Rietveld building. Both buildings now enclose the courtyard, which boasts a beautiful, big tree, and turn it into a central patio. In addition, physical interventions have created actual connections and overlaps. A bridge connects the first floor of the new building with the third floor of the Benthem Crouwel Building, for example, and a staircase ascends from the patio to the roof of the new building, which can be walked on. In addition, the outdoor space can be considered part of the interior in that it can be used as a maker space that complements the assembly hall and wood workshop. Sliding the high façades open makes this possible.

Architect Paulien Bremmer, who herself studied at not only Delft University of Technology, but also both the Gerrit Rietveld Academie and the Sandberg Instituut, received this design commission after an internal competition to which teams of students, lecturers and alumni could submit proposals. The Rietveld community and a professional jury both selected Fedlev, the design team that Bremmer formed with fellow Rietveld alumni Maze de Boer, Luca Carboni and Sandra Stanionyte; during the design process, more designers joined Fedlev. Hootsmans architectuurbureau has complemented and supported the design team from the preliminary design stage onwards.

Aiming to work in a multidisciplinary way, Fedlev created so-called ‘white spaces’ inside the design and called upon artists and designers from the art academy to fill them in. These subsequently designed components of the new building and of the redevelopment of the existing buildings.