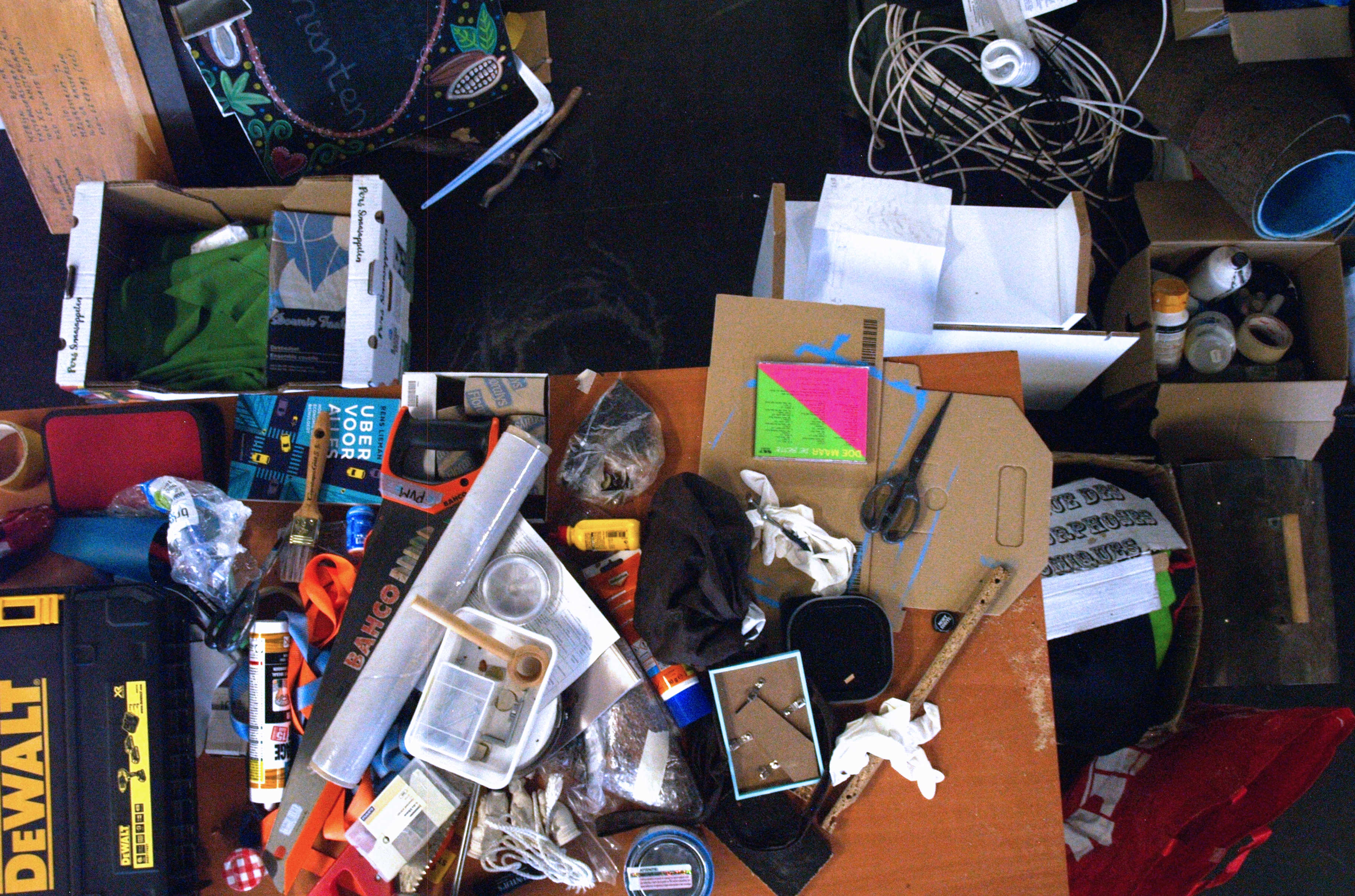 “One’s company, two’s a crowd, and three’s a party,” Andy Warhol once said. Top that up to eight and you have collective Paleis van Mieris, an eight-headed wolf pack of artists working alone-together after meeting each other during their DOGtime studies at the Gerrit Rietveld Academie.

Their quick-and-dirty exhibitions on the Frans van Mierisstraat — hence the name Paleis van Mieris (“Palace of Mieris”) — quickly became renowned amongst artists, art-lovers and curious neighbors alike. The exhibitions are seldom curated; unexpected friction is welcomed because, when things rub together, you can kindle a fire. What counts is the energy.

By now, the collective has operated from an array of locations and studio spaces, the only common denominator being a stimulating sense of temporality. The number of exhibitions, projects and collaborations adds up to dozens — and counting! Currently, several Paleis van Mieris members are working at former Club Lite at Jan van Galenstraat 24, where people once used to dance barefoot and get high on raw chocolate.

Four of the eight members (Barbara Dubbeldam, Maarten Schuurman, Marc van Dijk, and Vincka Struben) are present to look back at their studies and discuss how their collective came about, speaking on behalf of the other members (Esther Brakenhoff, Ovidiu Spaniol, Sander ter Steege, and Steffen Vogelezang) as well.

How did half of a class of the DOGtime evening program at the Gerrit Rietveld Academie decide to continue their artistic practice as a collective?

Marc: “It was never a deliberate choice; it just happened.” The others nod in agreement. “If anything, we could say it started when Sander and I were looking for a studio. It was the summer of 2014, right after our graduation, and just a few months later we found this ridiculously large space in the Frans van Mierisstraat.”

Marc: “It wasn’t just a studio space; it was an entire building, really absurd, about 4000 square meters, right around the corner from Amsterdam’s museum quarter. That was pretty unbelievable, even for the time. Sander and I felt: we need to share this space, and fast! It was an anti-squat with a one-month-notice policy, so we didn’t know how long we would be able to stay. We wanted to make an exhibition as quickly as possible, and the first people we thought of were our former DOGtime classmates.”

Barbara: “Of course, we were all very enthusiastic! The exhibition — Rosetta Stone — was an immediate success; a lot of people showed up.”

“The fact that we gave complete artistic freedom surely played its part,” Marc adds. “The work itself was never really argued. We invited specific artists to join us, of whom we thought they would fit in. We did discuss the relation between works, while installing. But we didn’t have time to discuss long in advance; because we had no idea how long the space would be available to us.”

Maarten: “Like a mushroom popping out of the ground. It’s there, then it’s gone. If you want that mushroom, you need to pick it fast!”

“So, in short,” Marc continues, “Paleis van Mieris came about because of all that space, and the urge to share it. The eight of us were available, simple as that. Later on, Paleis van Mieris evolved into something more than just the space. It became an energy in itself, and we became a collective.”

Can you describe the Paleis van Mieris energy?

Barbara grins, Vincka chuckles, and Maarten laughs in a brief moment of contemplation, eying each other mischievously. Marc: “It’s something we each feel amongst the eight of us. We noticed it first after we left the Frans van Mierisstraat and a few of us found a separate studio. Looking back, that was the moment we realised we were still a collective, even though some of us were working from different places. Despite the distance, the energy between us was still present.”

Barbara: “The energy is there as soon as we’re together. We’ll start exchanging ideas immediately, effortlessly, from regular banter.”

Vincka: “We feel like doing something, and then one thing leads to another.”

“The beauty of it is that it happens simultaneously,” Maarten explains. “We’ll be working on our own, solo practices, and then, suddenly, we’ll feel that it’s time to make something happen together. It’s a mutual urge. As if our parallel universes synchronise.”

A magnetic pull and – boom – the energy flows!

“Wait a minute,” Marc says. “That sounds like a cakewalk, but being a collective can be quite challenging at times. Barbara once said that Paleis van Mieris is like a band, which is a good metaphor. There’s the occasional drama. Everybody plays their own instrument.”

“Their own song, more likely!” Vincka remarks. The group laughs heartily. Marc: “But you keep going, with respect for each other’s artistic choices. A good band unites antagonistic forces.”

“The open attitude is key,” Maarten adds. “We’re not looking to deliberately criticise or curate each other’s work. Instead, we’ll walk through the space as a group and discuss the show while it is being built up. That said, it's not like our exhibitions are entirely void of curation. We actually put a lot of effort in the assemblence of artists and works. Except with Dufus Tidious, in which complete non-curation was exactly our concept. That exhibition was meant to be as democratic as possible: literally anyone could participate, all you needed was a registration number.”

Would you say DOGtime offered the sparks necessary for your collective energy later on?

Vincka: “Yes, in many ways, Paleis van Mieris is like a continuation of how we worked together during DOGtime. We were already constantly making exhibitions in those years: in the Vetterstraat, the Vondelbunker, the Kauwgomballenfabriek… And don’t forget: at DOGtime, most students have already been working in another profession for a good amount of years. The whole energy is different to begin with. The choice to study is well considered, the students are very determined.”

Maarten: “For most of us, it was a bold decision to go to art school. Personally, I finally gave in to the inkling that maybe, just maybe, studying art was actually the right thing for me. You get older, and suddenly there’s this feeling of now or never. That common drive really forged a bond between us.”

Marc, nodding: “Motivation is essential, since studying at DOGtime comes on top of your regular day job. And it’s not like the teachers would go easy on us just because our classes were in the evening hours. On the contrary! It was downright demanding.”

Barbara: “The only advantage, if any, was that most of us were at an age were you take brutally honest feedback less personally.”

“Most of us, at least,” Maarten says, grinning.

Vincka: “The fact that you know how to make a living outside of art school helps, too. I can imagine that getting started as a full-time artist after graduating from the regular daytime departments at the Rietveld Academie can be pretty overwhelming. For us, the balance between making money and making art was already established.”

Marc: “We had outgrown that searching phase of our early twenties, that phase when finding a new washing machine can easily take up a full week.” The group chuckles. “It was tough because time was scarce, but our commitment was all the more present.”

I’m reminded of how a good hearth and some persistence helps to conjure up a fire. In other words: would you say your exhibitions are about creating the right circumstances to let art florish at its fullest?

Marc: “In the end, as Paleis van Mieris, we’re basically creating nice opportunities for ourselves and other artists. That’s a pretty open approach for a collective. If you look back at history, collectives were often defined by a distinctive style or method, like Dadaists. But for us, it’s never been about that. It’s mostly about creating an occasion for each other.”

“As a means for growth,” Maarten adds, “for keeping your own artistic development on edge. At the same time, it’s really fulfilling to see how your fellow artists grow. The element of surprise when someone makes an unexpected move in their work is so much greater because you know where someone is coming from, because we’ve been following each other’s process from the very beginning. I love that.”

The electric power of joined forces!

Barbara: “I remember how Manel [Esparbé i Gasca, head of DOGtime] kicked off our first year by saying: ‘You don’t go to art school just to study art. By going to art school, you become part of a community.’ There was always an emphasis on doing things together, helping each other, a strong sense that you need each other to survive in this world. I think we all share that mindset.”

Vincka: “Yes, Paleis van Mieris is very welcoming. Not only to its members but to other artists as well. For us, it’s people first; work second. We invite artists, not art works. The energy is most important.”

Maarten: “A Paleis van Mieris exhibition ties all those energies together.”

“A criminal bond, almost!” Marc suggests. “Once you’re in, you’re in. Stepping out is a different story.”

By now, the group is giggly and joking around. Wine is poured; anecdotes fly over the table; good old times and exhibitions are recalled. Maarten sighs, contented, and admits how much he’s missed this buzzing atmosphere.

“As you can see,” Marc concludes, “the shape and form of Paleis van Mieris may be constantly changing, but, without a doubt: the energy prevails.”

2015 Level Up – group show by Paleis van Mieris and guests

For a full factsheet of all Paleis van Mieris events: info@paleisvanmieris.nl