Koos Buster / More than a brick and a good story 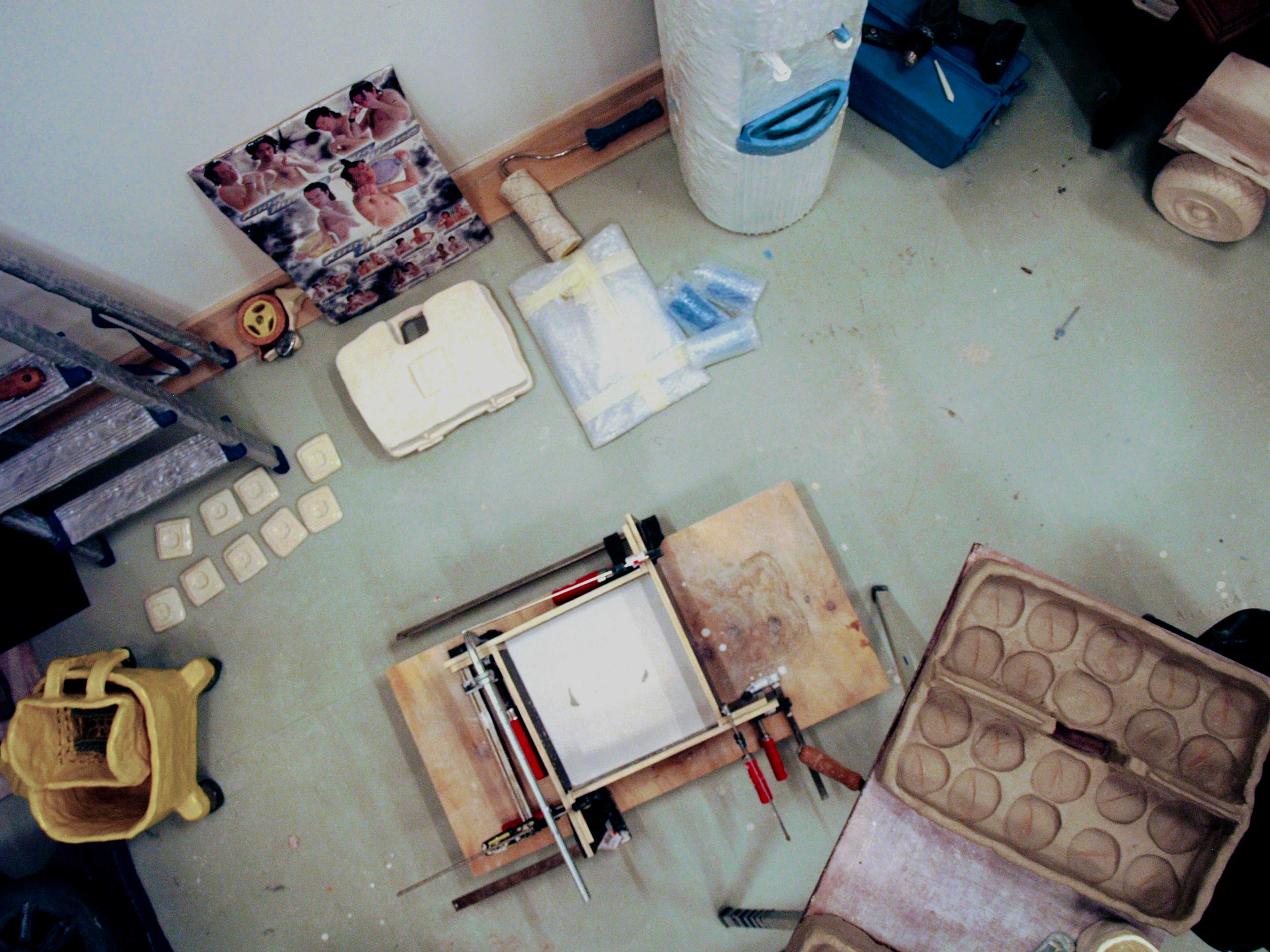 Remember when, as a child, you could transform the world around you with just your imagination? Even the simplest of utensils had the potential of becoming something profoundly important: a toothbrush, a light switch, a mop wrung out and resting in a bucket in the closet. Once grown up, we tend to overlook the plain, everyday objects that surround us. Many of us may even forget how the world can transform in our mind’s eye, forget about our own transformative nature.

Not so for Koos Buster, alumnus of the Ceramics department, class of 2018. Walking into his small workspace at the rear end of a hangar, housing about two dozen containers with studio’s and workshops, is like walking into the making of a quirky, parallel version of this world. Ceramic sockets are neatly lined up next to a ceramic first-aid kit ready to be painted, coffee is sipped from a thick and wonky mug, tools are interchanged with life-size ceramic ones. It is like seeing the world through fresh eyes; undeniably similar to the real world, but less rigid, visibly handcrafted and wobbly, with a sheen of ceramic glaze.

This is Koos Buster’s world, in which he performs the role of Ceramic Influencer (@koosbuster), Clay God (particularly when his daughter — ‘half-Clay God’ — Zisou enters the scene), or Minister of Ceramic Affairs (for the serious stuff). Koos Buster calls it “zooming in and out,” similar to how children check in and out of their fantasy play, brushing effortlessly against conceptual art history questioning what is and isn’t art.

For Buster (his preferred name), zooming in and out is his second nature, if not first, with a special inclination towards the undervalued, underdog things in life. Through ceramics he transforms any thing that catches his eye in this material world — be it a cigarette butt or an overturned scooter — into a visibly handcrafted, glossy glazed life size-twin to “give it a small stage to shine.” Not in a slapstick kind of way, more in a tragicomic kind of way, because despite the disarming, playful aesthetics of his work, the undertone is a darker shade of hard-knock sentiment.

Curtain draw! How did Koos Buster enter the art scene?

“It’s a funny story. Before my studies at the Gerrit Rietveld Academie, I was set on going to theater school to become a mime. I auditioned five years in a row, utterly devoted, but without success. Meanwhile, my brother had finished the Design Academy in Eindhoven and he kept telling me: Buster, you’re creative, you’re good with your hands, why not go to art school? He talked me into doing the Orientation Course at the Rietveld, which was good fun, but even then, I was still not convinced. To be honest, my esteem for art school was blatantly low. My idea was that art students could graduate with nothing but a brick and a good story. Actually, I still think art students can graduate with nothing but a brick and a good story!” A roar of laughter.

“What persuaded me in the end was my admiration for the artist Zoro Feigl, who is an alumnus, too, and who I knew from summer camp on Terschelling when I was a child. The fact that he had studied at the Gerrit Rietveld Academie sparked my curiosity just enough. And of course once I started, I really got into it: the tinkering, the handiwork. I’m an ambitious guy, so, soon enough, there was no holding back. It baffled me that some of my fellow students preferred to party instead of finishing their assignments. That lazy attitude drives me nuts. For me, it was a privilege to be at the Rietveld Academie. I worked at a bar five days a week and spent every spare hour studying, no exception. If you ask me, that’s the way to go. You need to be the one putting in the effort. If you do, you’re bound to get a lot out of it.”

Your work paid off with substantial acclaim. You’ve been on a roll ever since, creating new pieces non-stop. Ironically, those pieces have a real ease about them, a sense of play. Does work and play seesaw like zooming in and out?

“I’m constantly zooming in and out, that’s for sure. I can’t help it. I even feel as though my pieces have their own personality. Take Gert for instance,” he says, pointing at the water cooler in the middle of the space. “No, wait! Henk. Henk’s got a little more cockiness about him.” Buster chuckles. “I think it’s the wobbliness that triggers the imagination. It gives them character. I like to mould them that way, like a sketch. Before the Rietveld Academie, even before the mime auditions, drawing and sketching was all I ever did. In fact, I consider ceramics just a next step in drawing. For me, working with ceramics is like drawing in 3D. When I’m working with clay it feels like sketching in space. I love how clay can be endlessly shaped and reshaped.”

The way you talk about clay reminds me about how we human beings constantly shape and reshape our lives. As children we use our imagination, as adults we’re moulded and changed by our experiences. Would you say you were moulded or changed by your studies?

“To be honest, I feel that I’m rather conservative when it comes to change,” Buster admits. “I’m a downright nostalgic. Take Amsterdam, for instance, the city where I was born and raised. Seriously, the nostalgia I have for this city is bordering patriotism!” Another burst of laughter. Buster points at his red sports cap with soccer emblem. “Says the guy with the Ajax cap. No, really, nostalgia is all over my work. That’s why I refer to my pieces as “monuments” and “masterpieces,” because back in the good old days, making a masterpiece was your duty as an artist!” He grins.

“There was a crucial moment though, halfway through my studies at the Rietveld. The Frans Hals Museum had commissioned my class to make a vase, but I really wasn’t in the mood for making a vase. I thought: you know what, they can use a mop bucket instead. And there you go: I made a ceramic mop bucket instead of a vase. And that moment still defines how I work today. Take my ‘Cleaning Trolley’, for instance, which I consider a proper masterpiece. The cleaning trolly is basically a superlative of that very first mop bucket I made; it’s like the ultimate, most elaborate version of the mop bucket. In a sense, making the cleaning trolley was just me amping up my game. As said, I’m an ambitious guy. My subject matter may look ordinary, but I’m very serious about my work.”

A brief pause. “But you’re right, during my studies, change did get the better of me. In my first year at Ceramics, my girlfriend broke up with me, and two years later she took her own life.” He points at a small picture propped up on a shelf. “That’s her,” he says. “Tex. The semester after our breakup my work was pretty dark. Black cans, steel frames, my own head on a stick with a drooping eye… I put a lot of my sadness into the ceramics I was making, but by doing so, I realised that the sadness sort of left my body and went into the piece instead. A completely transforming, changing experience: dark on one end, inside me, and light on the other, in my work, with all its wobbliness and humor. In that sense, my years at the Rietveld completely merged with a personal transformation. I am happier now, but the motive behind my pieces is still often darker than the lightheartedness they imply at first sight.”

Part of your graduation work was a wall with decorative plates depicting odd, tragicomic scenes and verses in watery Delft blue, titled ‘Almost everything I don’t like.’ It’s as if the uncomfortable — be it an underdog object, deep sadness, or distaste — has become your principal point of departure.

“I have come to appreciate working with things I don’t like. When you spend so much time and effort on something — with the moulding, the painting, the decorating, the baking — you start to see things from a different angle. It changes your perspective, your attitude; it might change you all together. I find that intriguing. Those plates are an ongoing series, each a small monument in themselves, a celebration of sorts. I’ll pick anything that gives me the creeps, like church; or frustrates me, like killer whales, because they eat dolphins; or find completely ridiculous, like a baby in a buggy with miniature Nike sneakers and a fur collar; and put all that into some fine decorative plates.” Buster laughs heartily.

“Of course, in a sense, it’s just a diversion tactic away from the things I REALLY don’t like. Like Tex’s death. I processed losing her by making monumental plates of other, lesser things I didn’t like but could at least comprehend. That’s why it’s called ‘Almost everything I don’t like.’ I think that same tactic actually counts for a lot of my pieces. I know, it’s sentimental, but luckily people seem to appreciate it, nonetheless.”

Perhaps it offers us a sense of catharsis we all long for.

“Yeah, it’s the simple acceptance that it’s totally fine and even worth a laugh to feel like a bag of shit sometimes. Really, in the end, my work is not that pompous, I just want to make you smile. Not in a shallow way though, there’s enough story to back up every piece I make, but I trust the story will speak for itself as long as there’s fun and humor and some kind of celebration in the making. The making renders change. Or is that me zooming in again?”

“Come to think of it, I should invite some of my former Rietveld teachers to come discuss my work. Things have moved so fast after graduation, it’s time for some reflection. Hearing my teacher’s thoughts has always given me a grip on what it is I’m actually doing.” Then, with a mischievous look and a thundering voice: “As the Minister of Ceramic Affairs would put it: a smile’s a good place to start!”

2020 Room on the Roof at the Bijenkorf, Amsterdam