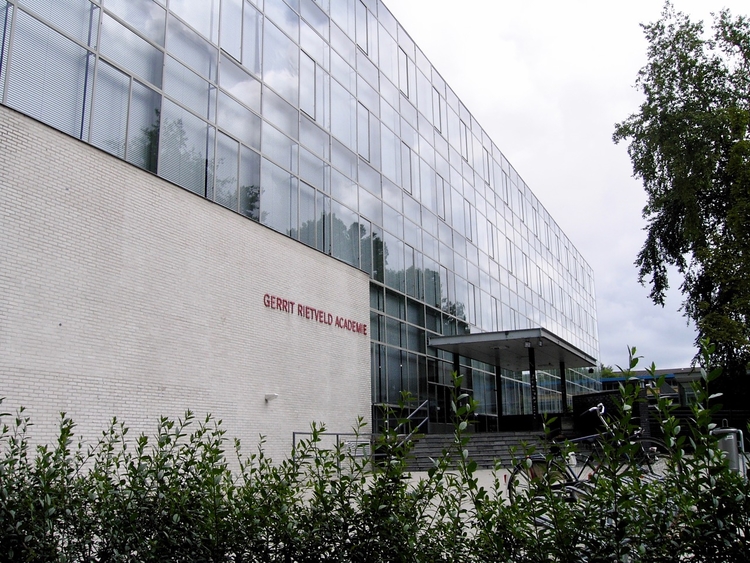 Today the Getty Foundation (Los Angeles, United States) announced 13 projects that it has awarded grants to in the context of its Keeping It Modern programme. The Rietveld Building, the main building of the Gerrit Rietveld Academie (Amsterdam, Netherlands), is among the selected projects. Since 2014, Keeping It Modern has distributed grants to 64 projects of outstanding architectural significance that are exemplary of the preservation of twentieth-century buildings.

The main building of the Gerrit Rietveld Academie in Amsterdam was designed by Gerrit Rietveld (1888-1964). As a tribute to the architect, the academy has borne his name since 1967. In the post-war period Rietveld designed two academy buildings, one in Amsterdam (design 1950 – completion 1967) and one in Arnhem (design 1956 – completion 1963). The themes ‘space and light’ and ‘prefabrication’, which are leading in the work of Gerrit Rietveld, culminate in these academy buildings. Rietveld designed the buildings in the late 1950s during the most productive period of his life and counted them among his most important commissions. The building in Amsterdam has been listed since 2002 and underwent a large-scale restauration in 2004. The building in Amsterdam has been on the municipally-listed Heritage Monument since 2002 and underwent a large-scale restoration in 2004.

By separating the curtain wall from the loadbearing structure and adding razor-sharp details, Rietveld achieved a large degree of openness and transparency throughout the building. The Rietveld Building has been of tremendous value to art education over the past 50 years; despite major developments in education, the building has always been able to offer suitable accommodations. The most important challenge the Academy faces today, therefore, is to preserve the architectural value of the Rietveld Building and safeguard its contribution to the future of art education.

In addition to the task of recording all there is to know about the building, the question is how to preserve the transparent curtain walls, given the increasing sustainability requirements for buildings by both the Gerrit Rietveld Academie itself and by the Dutch government.

The research that lasts a year and a half is a collaboration between the staff of the Gerrit Rietveld Academie, WDJArchitecten, engineering office ABT and Rietveld expert Erik Slothouber – the latter two were responsible for the 2004 restoration. The grant will allow the Academy to bring in specialized experts in the field of restoration of twentieth-century architecture to conduct research. The research programme is subdivided into four themes – Historical Research, Sustainability, View of Future Education, and Maintenance – which eventually combine into a Conservation Management Plan (CMP) that will help the Academy provide for the preservation and maintenance of the building in the coming decades as well as its day-to-day maintenance and repairs.

‘This special grant will allow us to carry out fundamental research into the building and at the same time make proposals to prepare this unique educational building in a dignified way for the education of the future.’

- Henri Snel (architect and project manager of the Keeping It Modern programme at the Gerrit Rietveld Academie).

In addition to the Gerrit Rietveld Academie, 12 other special architectural projects will receive a Keeping It Modern grant. The open call for 2020 resulted in a record number of 90 applications. This year is the last year the grants will be awarded.