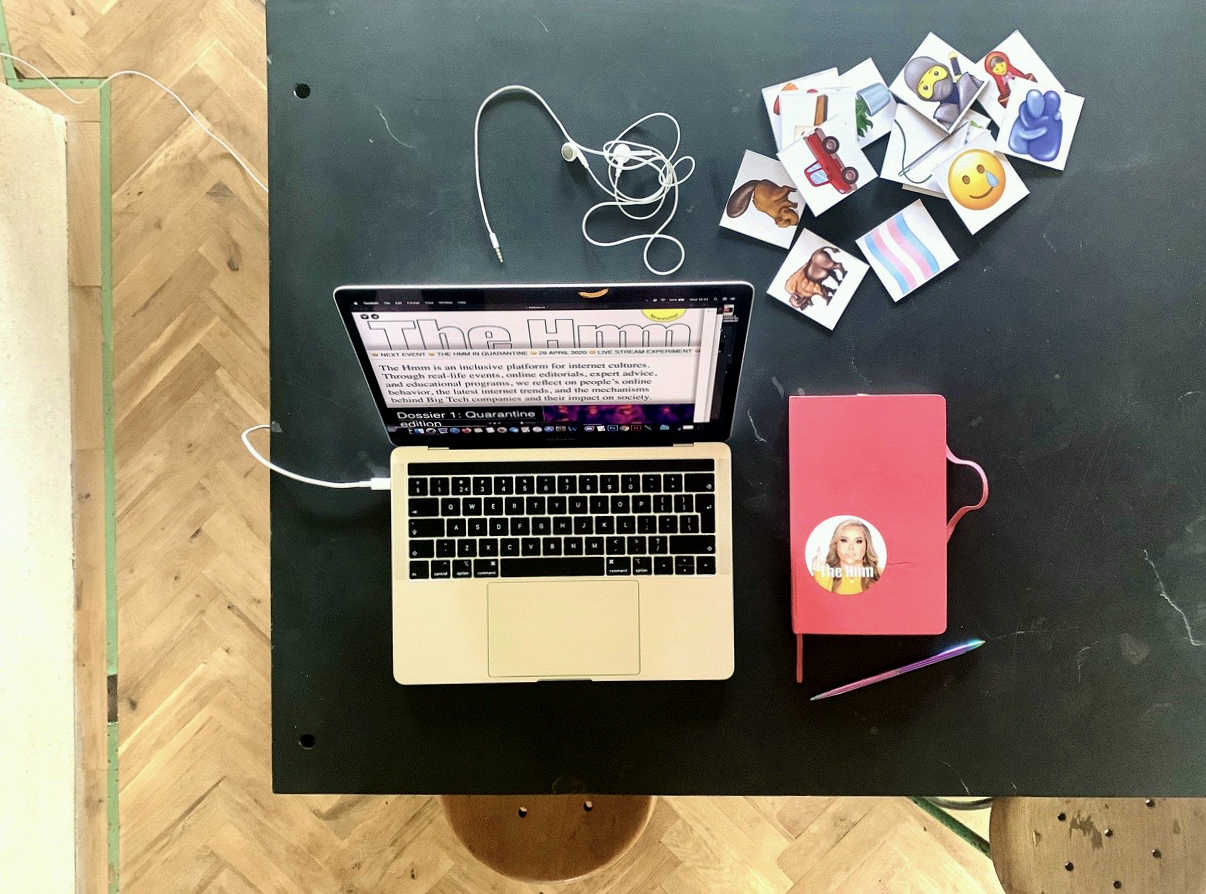 It is April 23, 2020, and on this date eight years ago, Beeld & Taal alumna Lilian Stolk was in the midst of keeping track of international celebration days for her graduation project ‘Ik hou van vieren’ (‘I love celebrating’) at the Gerrit Rietveld Academie. A quick look at her archive tells us it is World Book and Copyright Day. (“Ah yes,” she reminisces with a chuckle: “Those days never fail to pop up.”) The significant difference between 2012 and today is that we now find ourselves in a time of worldwide lockdown due to the Covid-19 pandemic.

Physical closeness is carefully avoided, traveling reduced to a minimum, activities cancelled or postponed until further notice. Usually, Lilian works in her studio—a lofty work space shared with other artists, in a tall building hovering over an otherwise bustling street in the midst of Amsterdam—but now, we connect virtually, each from our own home. Lilian is happily expecting a baby, so she’s playing it extra safe, just in case.

Since the publication of her research on emoji, Het zonderwoorden-boek, Lilian has been known and acclaimed as emoji-expert. At the moment, however, her main focus is on The Hmm, an inclusive platform she co-founded in 2016, investigating the mechanisms of internet and people’s online behaviour. A brand-new website just went live, so in getting that up and running Lilian has been working digitally anyway. Living somewhat outside of the city, in a beautiful farm house sustainably reconstructed by her partner Joris Brouwers, also an alumnus of the Gerrit Rietveld Academie, she’s been finding herself quite relaxed under these unprecedented circumstances.

She smiles, understandingly. “You might expect that, because The Hmm deals with internet culture, we’re already attuned to a solely online, non-physical way of working, but actually, almost all the events and lectures and workshops we organise take place in real life. The online-offline combination is part of the fun. You kind of take the internet out of its usual context and that gives a necessary distance to really see it, as a viewer instead of a consumer, together with other people instead of alone from behind your computer screen. An evening with 10 speakers in five minutes, which is kind of our usual, PechaKucha format, might feel very similar to scrolling through the internet, but in an offline setting you sense it differently, with more reflection.

So, I can’t really say I’m not at all bummed out by the fact that all the events I had coming up with The Hmm can’t take place as planned: preparations were made, guests were confirmed, everything ready to go… And to be honest, it did take me a moment to readjust. But as I was thinking back at my studies at the Gerrit Rietveld Academie, thinking about what I took from it, I realised that, especially in a time like this, I am pretty equipped for dealing with things creatively. I feel challenged to think about other ways of doing things, but I take a lot of pleasure out of that. I really enjoy it.”

“It’s a huge advantage! When something new happens, a change, people generally tend to be somewhat anxious and critical. Take emoji: there were a bunch of skeptics who really thought using emoji would be a threat to writing, that we would forget how to write, forget how to express ourselves with words. But in essence, change is rarely that drastic. Things kind of stay the same, we just develop different ways of doing them. Like with the winking smiley, for instance. Apparently, our brains register that winking smiley in the exact same way it would register someone winking in real life. When it comes to forgetting how to write: the opposite proved true. With all the apping and messaging, people are writing more than ever and even actively expressing themselves through posts and discussions on social media platforms.

Interestingly enough, though, it turns out that in a time like this, when there’s basically no physical contact, people are less inclined to connect through the usual habit of texting and emoji. Instead, we massively turn to video-calling. Apparently, that alternative comes closest to the real thing, to real, physical communication. Maybe, in the end, texting just doesn’t cut it when it comes to that kind of contact. Maybe writing a text just takes too long?”

“Yes, and investigating the right shape for something. A new, different shape, maybe, or a variety of shapes. Is Zoom really the best platform for our current, virtual way of living? Do we have to give up our privacy for public health? Do we need more emoji to express ourselves? That open attitude has come to define how I like to work. The emoji-project in particular prompted me to consider all kinds of shapes and media—be it a lecture, a book, a workshop, an app… Working that way allows me to look at the subject from all the different sides that interest me: the historical and cultural side of it, the technology behind it, but also the graphics and design.

Coming from the Gerrit Rietveld Academie, you might expect my first impulse would always be to approach things artistically, in terms of an exhibition for instance. I mean, for me at least, becoming an autonomous artist seemed like the ideal. But then, well, it turns out to be more complicated, and that realisation can be a struggle—I’m sure you can relate—especially in those first years after graduation.

Maybe it is because of the fact that I had both an academic and an art education— since I studied history before—that my interests and abilities seemed too wide ranged to really fit into that label of an artist alone. I always end up with a lot of research and analysis, and an amazing amount of stories. In a way, it’s almost a necessity to exceed the limits of an exhibition, that’s to say: of just one kind of medium, let alone a single work of art.

But for me, it’s absolutely liberating to work that way. And in fact, I think studying Beeld & Taal—and maybe that goes for studying at the Rietveld in general—got me to think out of the box like that. Despite the artistic emphasis, the medium was never a fixed thing. Writing poetry, painting, film making… It was all possible. I felt continuously challenged to turn things over and find the best fit, and that really triggered an openness and flexibility of thought. That’s definitely what appealed to me about the Gerrit Rietveld Academie in particular.”

“In a time like this I’m really happy with that background and I consider myself pretty lucky to have been able to attend both university and art school. Of course, I can’t speak for everyone coming from the Gerrit Rietveld Academie, but I think that, thanks to my studies there, I definitely developed a more open, curious attitude towards change. In a time like this, when things don’t go as planned, using that creativity is downright fun and exciting.”

On April 29 The Hmm organised a live-stream experiment investigating the platforms and tools best suited for virtual events and experience. The most promising outcome may determine future, virtual The Hmm events. Take a look at the Quarantine dossier to read more about The Hmm’s thoughts on the role of internet in a time of self-isolation, including an interview with artist and Rietveld alumna Alina Lupu. The next PechaKucha-style live-stream event, ‘Hackers & Designers’ , takes place on May 27. Sign up!

In the meantime, real life events have been rescheduled. Next up on June 17 is an evening on ‘Deepfakes’, the first edition of a four-part series at Felix Meritis supported by the Creative Industries fund and Amsterdam Fund for the Arts. Stay tuned by signing up for The Hmm newsletter.

And be sure to check out Lilian’s newest app: the Emoji Voter!