Ola Lanko / The qualities of rot 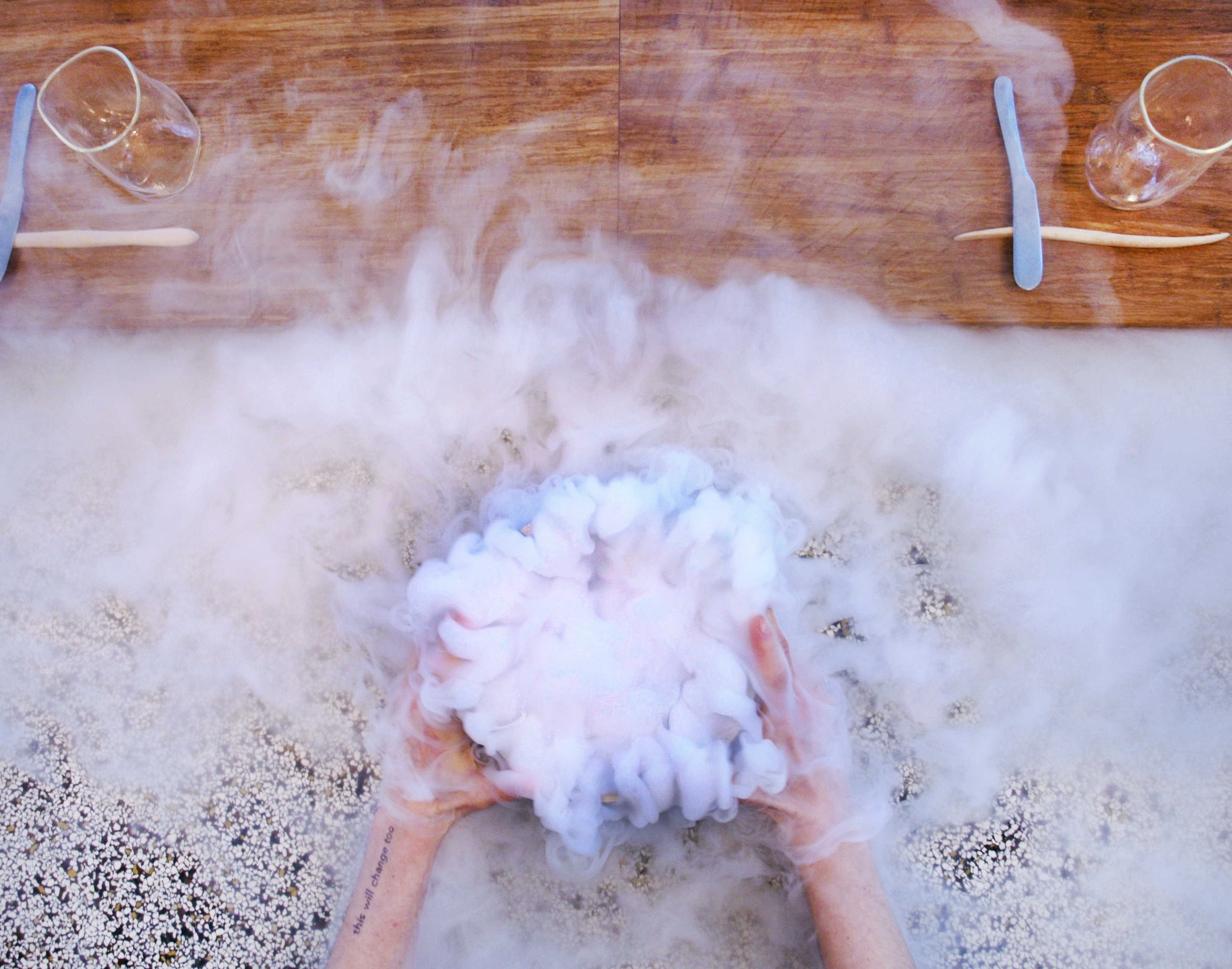 Something changed for Ola Lanko when she opened her omakase restaurant, diptych, about a year ago. Soon after graduating from the Photography department in 2012, her work as a visual artist took flight, but she couldn’t help questioning the structures of the art world and her place in it.

Shaking up the status quo comes natural to Ola. It shows in the photogenic installations that define her artistic practice, through which she unhinges the photographic frame, willfully reminding you to consider all sides of an image including the context and semantics that determine it. And now, it shows in her conceptual approach to food: first with the experimental ice cream shop Ludo & Hedo, and currently with a bar-like venue offering a unique, culinary experience for eight guests.

“Omakase is a concept built on trust,” Ola explains. “It means: I leave it up to you. There’s no menu, the ingredients constantly change, and my guests never know what to expect. If you would translate that into restaurant terminology, you could call it a chef’s table. Except: I’m not a chef, this is not my table, and I don’t believe in the hierarchy that a chef’s table suggests.

Instead, I’m an artist, I have a conceptual interest in food, and there’s an interdependent relationship between me and my guests. They give me their trust, I give them something back. Without my guests, there’s no cooking, nothing happens. It’s a fluid ecosystem in which everyone has their own role and place.

This is the atmosphere I try to create with diptych. It’s a free-flowing space that doesn’t really fit into a box. It’s a pact of trust that takes three hours. It’s not really a restaurant, it’s a journey though different ideas that manifest themselves in food. People decide for themselves what to call it: a work of art, a social experiment… The important thing is that people are thinking about what it means to them.”

The omakase approach allows Ola to offer her guests an experience designed to stretch the tastebuds and, correspondently, the brain. Her courses are full of metaphors, ideas translated into flavour and shapes, meticulously enhanced by carefully arranged plates, lighting and sound.

Every detail is aimed to circumvent any expectations and to trigger an open mind. By using metaphors, Ola brushes against sympathetic magic, a concept proposing that a person can be supernaturally affected by representations through images or objects—a concept that, not surprisingly, easily relates to the subliminal qualities of art as well.

Could you imagine a metaphoric dish representing your studies at the Gerrit Rietveld Academie?

Ola ponders the question. “It’s a strange place, the Rietveld,” she says thoughtfully. “Good, but strange. Do you know this ingredient called medlar? It looks like a little apple, but it can only be eaten once rotten. You pick the fruit when it’s still super hard, right when the first frost hits the ground, when it’s cold and there are no leaves on the tree. The fruit is frozen, green and undeveloped. It takes a few weeks in a bucket for the fruit to become ripe, a little longer to rot, and only then you can enjoy it.”

Ola flashes a smile. “Obviously, I experienced a lot of suffering at the Rietveld. I would consider my studies there as the ripening process. You’re picked from the tree, softened up with a lot freedom and trust, without any coherent structure or guidance. You get the feeling anything’s possible, and for a moment you might even start to think: OK, I’m on the right path!

But then that’s just the beginning of it. Soon enough, you realise you need to fully rot, for the fullest enjoyment. You’re exposed, you’re put down, you’re torn apart… It’s a tough and confronting time, but in the end you understand that all the suffering you went through was for a good cause and that, actually, you can enjoy the rotting part because it’s where the true flavour, your true quality manifests itself.”

What true qualities were manifested in you, after the rot?

“Freedom of mind,” Ola says decisively. “And fearlessness,” she adds promptly. “In my case, both freedom of mind and fearlessness are qualities that allows me to do what I want to do. I mean, look: here I am, an artist, I don’t particularly know that much about food, but I opened a restaurant which is actually being acknowledged in the culinary field.”

The rotting proved fruitful! Still, a cold frost and trees without leaves sounds like a barren landscape, one that is quite contrary to the fluid ecosystem of omakase…

“It was. And I used to think that a big part of my establishment was because of this almost military attitude I developed at the Rietveld Academie. Now, though, I can look back and wonder whether I would really have become a different person if I hadn’t rotted like a medlar fruit. It was good for me, but it’s not the only way, and it really doesn’t work the same for everyone.

You could be more like kimchi, you know, which needs to be massaged for an hour and then left alone before things start to happen! It’s about finding the right conditions, just as with cooking, to make something—or someone—manifest its best qualities.”

You chose the barren landscape at the Gerrit Rietveld Academie, even after initially starting your studies at the Royal Academy of Arts. What motivated you?

“It wasn’t really my plan to leave the KABK. I actually just went along with a friend who was doing the admission at the Rietveld, in need of a challenge. And, well, after a five-minute conversation with Johannes Schwartz and Paul Kooiker, I found myself completely devastated. They literally verbalised all my doubts, all the gaps and holes in my work that I didn’t want to admit to myself, because I didn’t know what to do about them. It made me so angry! And at the same time I thought: you know what, I need to be here.

Sometimes you need to put yourself into situations that force you to change. It cracks your shell, opens you up to new possibilities. In the world we live in, our ability to adapt and change is vital for our survival as a species. We need to practice that. After all, if tomorrow there are no more potatoes, what are you going to do? The world is changing, the climate is changing, and that change is rapid. It’s hard to survive if you’re afraid of exploring, of trying new things.

Creating that flexibility of mind is essential to me. It’s my essential motivation as an artist. I want to create a space for critical thinking, for surprise, for questions… And I believe personal growth comes best through experience.”

“Yes, food is a medium people are naturally familiar with, so they are more open to give it a try. It’s not like with art, where people often feel they don’t have the tools to express what they think about it. There’s no fear, no shame when tasting food. You can give someone an unexpected taste and if their experience is positive they could be like: I had this dinner that took three hours, with all these different ingredients, and I can’t even say if it tasted good or not, but I tried it!

And then, hopefully, when a new neighbour moves in who has, let’s say, three eyes, they will look at him and think: gosh, this guy has three eyes, he’s weird, but yesterday I had this medlar fruit, which was also very strange, but kind of good in a way, so you know what, maybe I’ll just give this neighbour a shot, and say hello.”