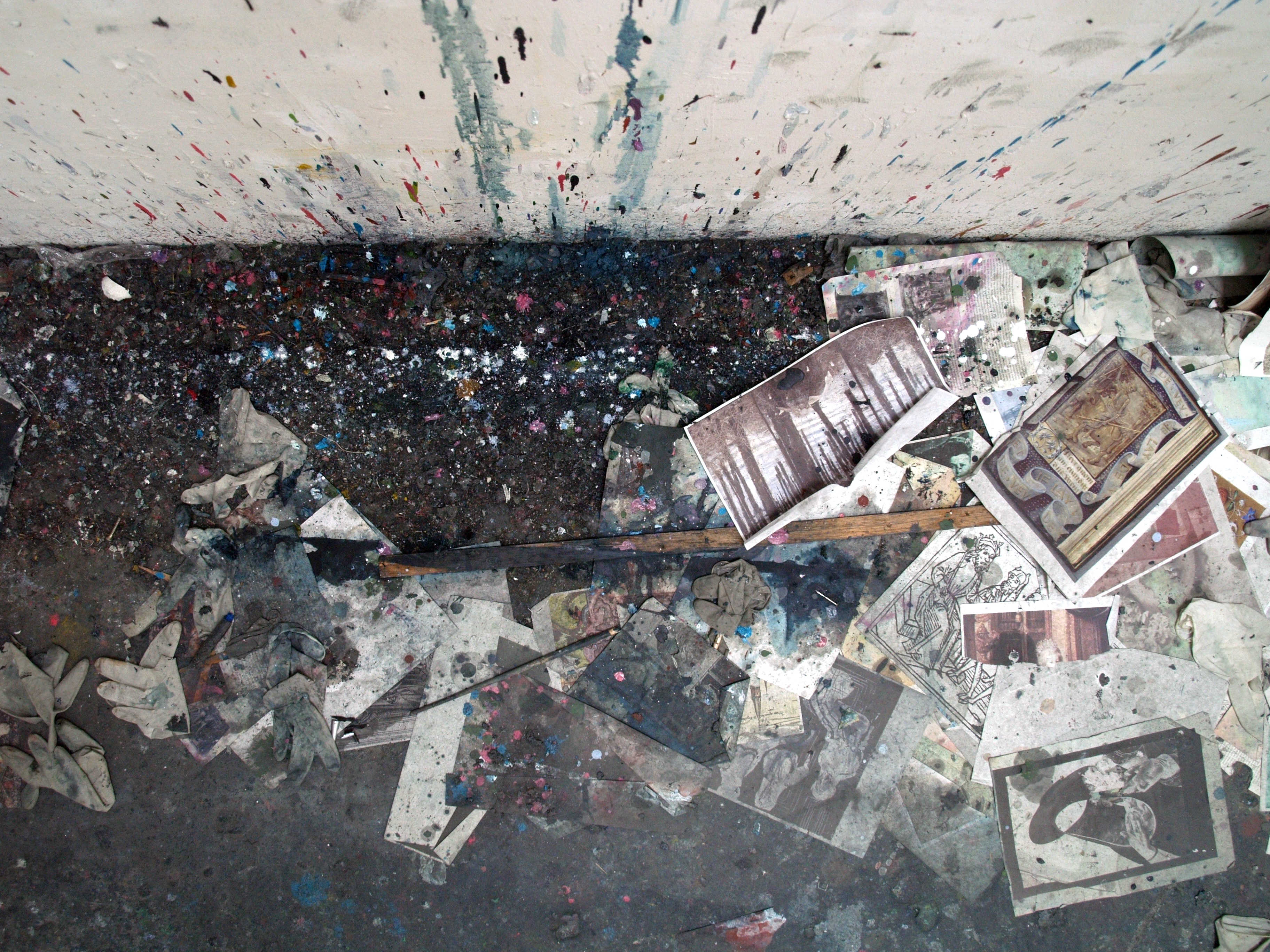 The long, dimly lit hall leading to Natasja Kensmil’s studio has the feel of a descent into a secret cave, but once inside the sun floods in from two skylights, sucking the colour from a mound of scraps and clippings, portraits of historic rulers, tragic heroes, martyrs and misfits, dusty art and history books that lay orderly scattered and bleached on the floor or piled on a table. At least a dozen canvases face the wall, except in one corner, where paint splatters give away the exact spot where Natasja works and has worked for the past 20 years.

Her paintings are heavily layered, not only by the accumulation of images and cross-references to historical figures, icons, and personal memories, but in their whole execution. Never does she start over once she’s begun to paint a canvas, which means that each painting is recomposed, repainted, and retouched layer by layer until it has reached a point of completion. A closer look can make your gaze shift further and further back, from the foreground through the residue of each layer to the very first strokes.

Before we shift further back in time, what would you say is in your foreground at the moment?

“In the foreground there’s this,” Natasja nods at her studio, the pictures, the books. “This collection of images, these historic figures and failures, their tragedies, all this. In the past, I painted a lot of specific people, like Elisabeth I or the Romanov family, but now I’m working with an entire period: from the Middle Ages to the Dutch Golden Age. I’m looking into Dutch history in particular, books of hours… During this period, illustration become the way through which every layer of society, farmers and religious leaders alike, could be informed. People were more outwardly, wanting to proclaim their messages to the world at large and able to thanks to the letterpress. I’m researching the darker side, of course, studying paintings of Frans Hals, Johannes Verspronck and Pieter Saenredam…”

Natasja Kensmil’s work is consistently rooted in history, but in her paintings she overturns the idea of history as a fixed truth. The historic figures that appear in her work, often repeatedly, seem to enact a slightly different version of themselves. That is to say: different from the iconic version we all know, as if she’s walked around to look at the scene from another side, from the back maybe, from within even, to verify those seemingly unambiguous views on certain historic facts. Her work is dream-like in the sense that time is actually a mere accessory, and the overall picture seems to have just transpired from the shadows into the clear: fragments that interlock into meaning. Despite the thickly applied paint and overwhelming darkness there’s a volatility about it all — shift your glance and another fragment surfaces to your attention, look away and the scene might disappear completely.

Could we, similarly, shift to your background now, your studies at the Gerrit Rietveld Academie looming in the shadows?

“To be honest, my time there feels very far back… I sort of see it as a cloud in the background. It’s been more than 20 years and a lot has happened since that time, both in my private life and as an artist.” A long pause. “It’s kind of mixed up back there… I remember the Basicyear of course. That was a great time, plain fun, I met a lot of good people. The teachers were a real team, they carried the whole department, organising all kinds of parties and events and readings. I remember them having a very idiosyncratic manner of teaching, very much reflecting their own thoughts, and opinions, and craftsmanship. With every class it was like stepping into the universe of that particular teacher, into a new world almost. And because I already had a lot of drawing experience, I felt pretty confident exploring those new worlds.”

“After the Basicyear I continued in the department that is now called Fine Arts. It was in another building back then, a new building with nothing in it. Apart from dividing the space into studios and getting to work, we were kind of left in the dark. That was really hard for me! The white, empty space, no assignments, no landmarks… It was nothing short of a quest, figuring out what to do and which direction to head for. I have this image of a whole bunch of searching students, a cacophony of people and sounds. Every time you’d sit down to work you’d be interrupted by someone passing by, someone wanting to chitchat, a teacher checking up on you…”

But as with your paintings, you didn’t give up or start over. How did you pull through to the next layer, so to speak?

“I knew I wanted to become an artist, that feeling remained. There was nothing I liked more than to draw and to paint. I just started to visit a lot of exhibitions, went to the Stedelijk Museum. I was very much inspired by the work of Philip Guston, ‘Painting, Smoking, Eating’, and decided to start drawing everyday life around me, like him. I was addicted to smoking, to coffee, to eating — those were my tragedies —, so I’d often paint burning cigarettes and ashtrays, or my friends drinking coffee, my boyfriend at the time… Things changed when cartoon figures started to enter my paintings. I was interested in the way Disney cartoons tell stories, usually very sweet and innocent stories, which then seemed strangely out of place in my own raw, more dark representations of the world like I experienced it. In a way, I guess, those cartoons were key figures similar to the historic figures in my work today. But I didn’t find my way in painting until after the Rietveld and during my studies at De Ateliers. It really took a while before I got any kind of foot on the ground: I was just drifting, swimming in a boundless place without anything really being right or wrong. Very soft, yes, a cloud.”

A parable comes to mind: even though possibilities seem endless in the vastness of an open field, when rain comes the drops scatter and dissolve into the ground; but in the narrowness of a ditch, restricted by its ridges, the drops can form into a stream that keeps its flow even in times of draught.

“Surely some people thrive in the open, but I was definitely longing to feel some kind of resistance. When Frank Mandersloot and Jan van Oord started teaching at the Rietveld, both very critical and opinionated, I noticed how nice it was to have someone ask me tough questions about my work. It forced me to take a stand and think about where I wanted to go. I remember a talk with Cornel Bierens, which had a huge impact on me. He asked: ‘What, as a Surinamese, would you do if you’d be invited to an exhibition with solely artists from Suriname? Would you participate in a show for which you’ve been invited just because of your roots?’ I was like: ‘Yes, of course! An exhibition! Of course I would participate.’” She chuckles. “Not the right answer, of course. Our discussion made me think about my ancestry, whether it should have an influence on my work. Do I want my work to be framed by my descent, or do I want to be free from the themes this could imply? Well, you know, it’s just an example, but these kind of questions really helped me a lot to shape myself as an artist.”

Who questions you now?

“My work itself, how it is perceived and appreciated. Mind you, even though the Gerrit Rietveld Academie felt like a soft, cloudy playground of sorts, being an artist isn’t a walk in the park! Sometimes I’ll work on an arm for weeks until I get it right, sometimes I’ll change the posture entirely. I’m my own critic now, which means I can be working on a painting for a year on end, two years even, until it’s so thick and heavy… But usually it just needs time, a fresh eye, and then something happens that suddenly transcends the picture that I had in mind at first.”

“It’s funny though, the way I paint does remind me of my searching years at the Rietveld: the continuous search is visibly interwoven in my painting process. In a sense, my hesitation is exposed through the paper, canvas, charcoal, oils and brushes… I try to be open, transparant, working my way through without a prefixed idea. That whole searching process is what builds up my paintings in the end: they are a demonstration of doubt. And I’ll admit that, for me, the struggle of the process is one of the toughest things in life.” Natasja laughs whole-heartedly. “But in the end, it still is what I love doing most.”