“the tannic acid in peat bogs will preserve anything, including the wearer of the Bog Jacket herself.” — Elizabeth Zimmermann

Legend, historical fact, myth and doubt gets woven into the tale of the Bog Jacket. Preserved for thousands of years in peat bogs or burial mounds, the simple pattern of the Bog Jacket persists and intrigues. A single rectangular piece of textile with two cuts and two seams. Turned one way it can be worn as a jacket, turned the other way and with one additional seam, as a blouse. This ancient garment — which remains in fashion to this day — challenges a perception of clothes as something with a short life-span, easily worn out, or out of fashion.

Over the past centuries the Bog Jacket, its history, technique and construction, has drawn the attention of archaeologists, craftspeople and fashion designers alike. In 1961 Cristóbal Balenciaga designed the One-Seam-Coat constructed in the exact same way, and in 2020 jackets following the same principle could be spotted on the Catwalk of Salvatore Ferragamo’s Men’s F/W collection. Weavers, patchworkers and knitters have reconstructed and adopted the pattern, making thousands of contemporary Bog Jackets. Last year, singer Harry Styles wore a contemporary translation of a Bog Jacket designed by JW Anderson, causing the internet to explode with knitted and crocheted DIY versions.

Line Arngaard and Rosita Kær both graduated from the Gerrit Rietveld Academie in 2018. Rosita’s graduation work Yes Darling, You Are a Real Woman investigated one of these prehistoric blouses and its connection to her grandmother, weaving, gender and history. For her graduation work A March Issue, Line produced a cover-to-cover remake of an entire Vogue magazine (in collaboration with Sonia Oet) in which every person was dressed in the same default outfit. Both projects dealt with archetypes of clothing, imitation of gestures, and reconstructions.

For Eight Cubic Meters Line and Rosita have created an edition of printed Bog Jackets. Each jacket functioning simultaneously as a container of its own history and as an instruction for its own reproduction. Pattern, page, and garment in one. 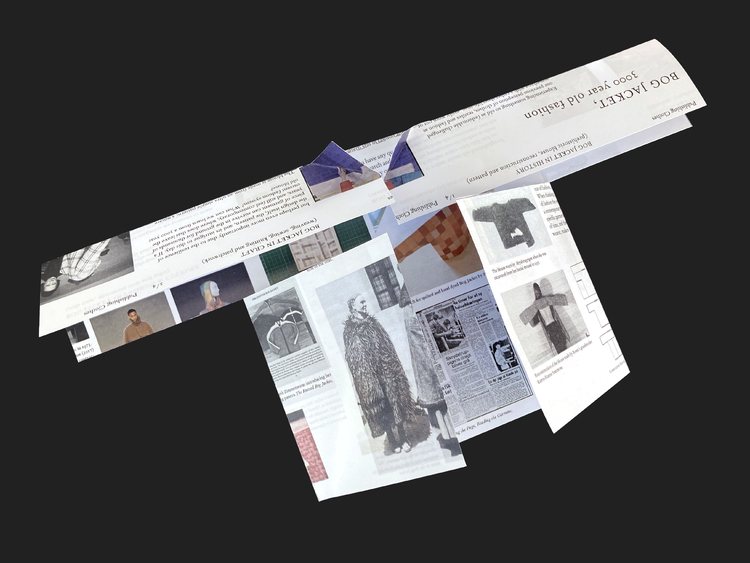